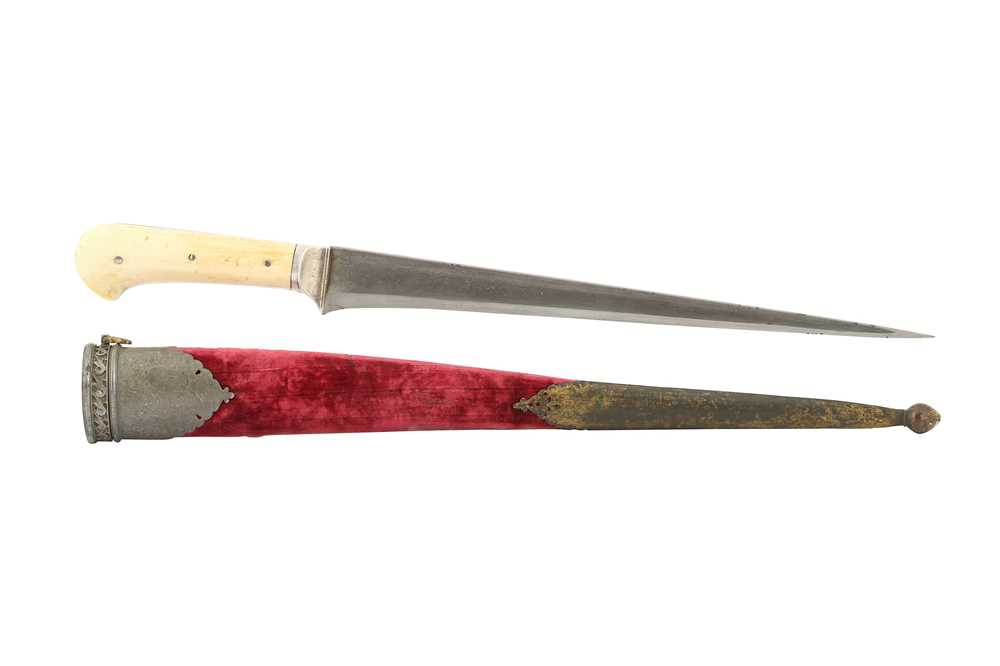 With a long, straight, single-edged, sharp watered steel blade, the ricasso plain except for an engraved mark on one side to be read as either the Hindu numeral '117' or the Sikh phrase ੴ (Ik Onkar, This Being is One), the two ivory panels of the handle fitted to the steel tang with three silver studs and the handle set on a plain silver mount, the tang plain, accompanied by a wooden sheath lined in red velvet, with an original watered steel mount at the top, the design reminiscent of Safavid steel panels, the gilt-copper fitting on the tip a later replacement, 43.5cm including scabbard.

The engraving on the ricasso is not clearly identifiable, but it is certainly intriguing. One could hypothesise that it represents a Hindi numeral, specifically '117'. Could that be a date? The Hindu calendar is based on the moon's movement around the earth and as such, it differentiates from the Gregorian calendar, mostly used in the West. The Vikram Samvat, also known as Bikram Sambat or Vikrami calendar, is the historical Hindu calendar used in the Indian subcontinent and Nepal and it starts approximately from 57 BC. Another calendar now in use, the Saka Samvat, starts instead from 78 AD. Thus, if the '117' mark was to stand for a date, it would be a very early one, and it would not match the stylistic features of this dagger and its dating to the 18th - 19th century.

As many of these pesh kabz daggers were actually produced in Iran and Afghanistan, perhaps the date follows the hijri format (Arabic calendar), and it could be read as either [1]117 or 117[0] AH (corresponding respectively to 1705 or 1756). This time period would match our date attribution, but it is unlikely that an Islamic bladesmith would write the numeral in Hindi rather than Arabic or Farsi.

A third option, which is supported by the arms and armours expert Rachel Parikh, the Assistant Curator at the Worcester Art Museum, is that the engraving represents the Sikh phrase Ik Onkar (ੴ ), a phrase denoting the One Supreme Reality in Sikhism. This phrase has a strong connection with the corpus of religious writings considered the pillar of Sikh belief. Indeed, the Ik Onkar is used as the incipit of the Mul Mantar, the opening verse of the Guru Granth Sahib, the first composition of Guru Nanak. This explanation seems much more likely than the Hindi date, and it would then indicate that the dagger was once a dear possession of a Sikh believer.