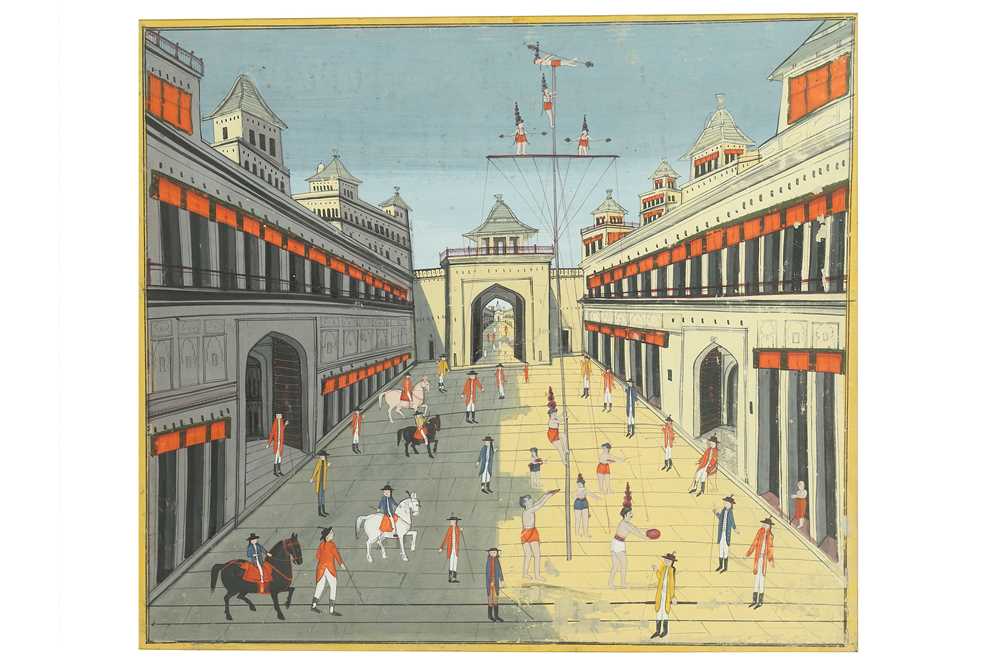 Opaque pigments on paper, the horizontal composition depicting a palatial interior with Indian acrobats entertaining a large group of Western officers from the East India Company, the officers’ attire and outfits with typical Western long jackets and high boots clashing with the bare bodies of the acrobats, the buildings on the side and background painted using the front perspective, providing depth and volume to the overall composition, set within black rules and ochre yellow borders, mounted, glazed and framed, at the back of the frame an auction house inventory sticker from possibly Bonhams or Sotheby's reading Contract 8843341 Line 4, the folio 28cm x 32cm (evident), 40cm x 49.5cm including the frame.

This painting shows a strong degree of similarity in terms of composition and style to two imaginary architectural scenes from the late 18th-century Jaipur illustrated in L. Leach, Mughal and Other Indian Paintings, London, 1995, nos. 7.87 and 7.88, pp. 754-755.

A similar scene with a burning merchant fleet, dated 100 years later, was successfully sold in our Rooms, 22 April 2020, lot 317. The similarity in the compositional style and the difference in dating can be explained by the increasing popularity of Jaipur paintings featuring European cityscapes, views and characters, inspired by Western engravings and prints brought to India through the East India Company’s commercial routes and harbours. It is worth noting the change of painting perspective from traditional Indian paintings, attempting to give to the composition much more depth and volume.