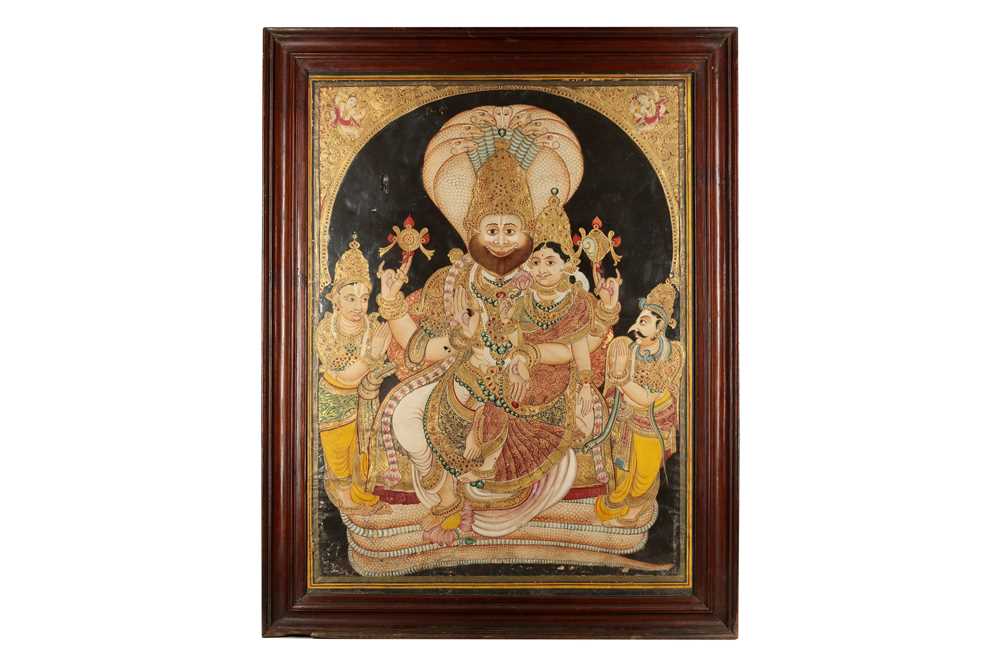 Opaque pigments, gold leaf, and sukka (limestone paste) on paper, the very large vertical composition depicting the fierce Narasimha, the half-man, half-lion avatara of Vishnu, seated on the infinite seven-headed serpent Shesha, with his consort Lakshmi, flanked on their right by Prahlada, the son of Hiranyakashipu and Kayadhu, and on their left by Garuda, the eagle vahana of Lord Vishnu, here anthropomorphised, Narasimha depicted with four arms, holding in two hands Vishnu's attributes like the wheel and the conch shell, and the latter two hands in the abhaya (fear-not) and varada (gift-giving) mudras, wearing a tall and heavily encrusted golden headdress, several gold, emerald and pearl necklaces, and bejewelled accessories, the scene set underneath a round golden arch with vegetal sprays and winged apsaras (heavenly creatures) on the squinches, against a dark black background, mounted, glazed and framed, 118.5cm x 91cm including the frame.

This splendid and very large portrait of the Narasimha-Lakshmi pair is impressive for its size, quality of decoration, and choice of subject. Traditional representations of Narasimha tend to portray the deity as he tears apart the limbs and guts of the demon Hiranyakashipu, who gained special powers by which he could not be killed during the day or night, inside or outside the house, any place in the world (i.e. neither in the sky nor on land nor in heaven nor in hell), by any weapon, and by man, god, asura or animal. In our lot, instead, the tone of the devotional image is undoubtedly softer and more peaceful, suggesting its probable use in a devotional context, possibly in a private abode. Several temples in Andhra Pradesh, Telangana, Kerala and Maharashtra are dedicated to the holy couple with their murtis featuring in the sanctums, but paintings portraying them together are rare to come by.