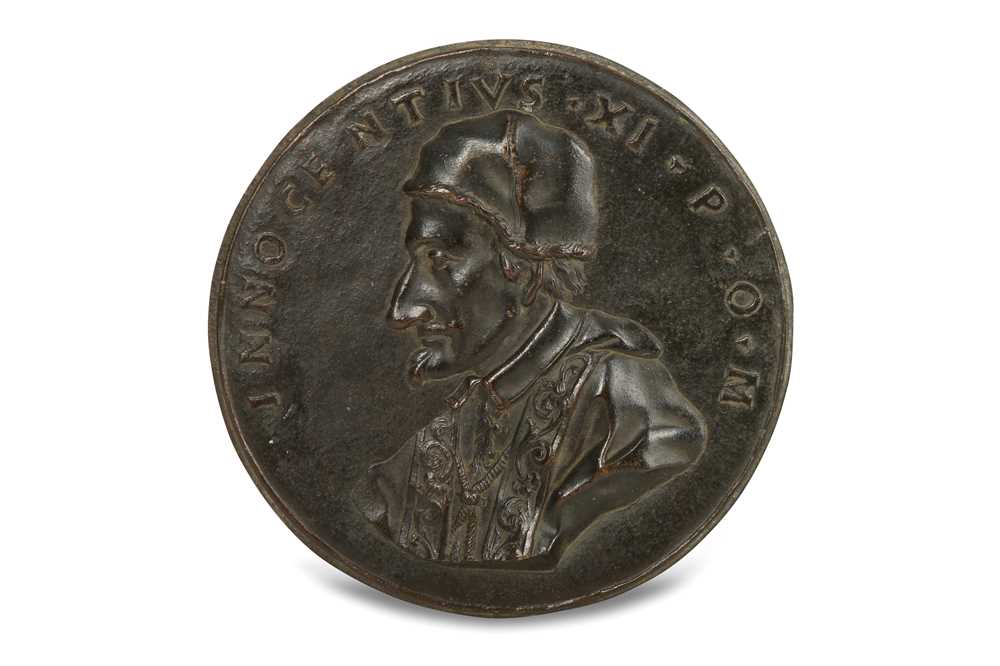 Click for high resolution
AFTER A DRAWING BY GIANLORENZO BERNINI (ITALIAN, 1598-1680): A PORTRAIT MEDALLION OF POPE INNOCENT XI (BENEDETTO ODESCALCHI, 1611-1689) C. 1676 Bronze, uniface, incuse-cast, 17.3cm diam. Inscribed: INNOCENTIVS*XI*P*O*M With thanks to Dr Charles Avery for his assistance with cataloguing this lot. Literature: I. Lavin, Drawings by Gianlorenzo Bernini from the Museum der Bildenden Kűnste, Leipzig, German Democratic Republic, exh. cat., University Art Museum, Princeton, 1981, pp. 41-42, fig. 27; C. Johnston, G. Shepherd, M. Worsdale, Vatican Splendour: Masterpieces of Baroque Art, exh. cat., National Gallery of Canada, Ottawa, 1986, p. 108, no. 35 The likeness is derived from a red chalk sketch of Innocent by Bernini in the Gabinetto Nazionale delle Stampe, Rome.  The facts that Benedetto Odescalchi (1611-1689) was elected pope in 1676 and that Bernini died in 1680 allows only four years for its creation.  Within this span, it was presumably produced shortly after Innocent’s election, while excitement was still high and before Bernini’s powers faded away as death approached. “…The pope’s appearance matched his personality.  He was exceedingly tall and gaunt, with a huge aquiline nose and a projecting chin.  These features are glossed over in many ‘straight’ portraits of Innocent, but we have a drawing, perhaps by Bernini himself, in which his crabbed and rather chilling aspect appears unmitigated. The profile of the pope may have been made in preparation for a sculptured portrait.” (Irving Lavin, 1981)   Worsdale attributes the unsigned and undocumented image to Lucenti, but the unconvincing relationship between the profile head and three-quarters view of the shoulders is quite unlike the smooth transition between the views to be noted in Lucenti’s signed bronze medal of 1678 depicting Innocent. Worsdale concludes: “The portrait of Innocent XI may be derived from a drawing by Bernini, who seems to have been regularly called upon to establish the features of the popes in a form suited to translation into medals”