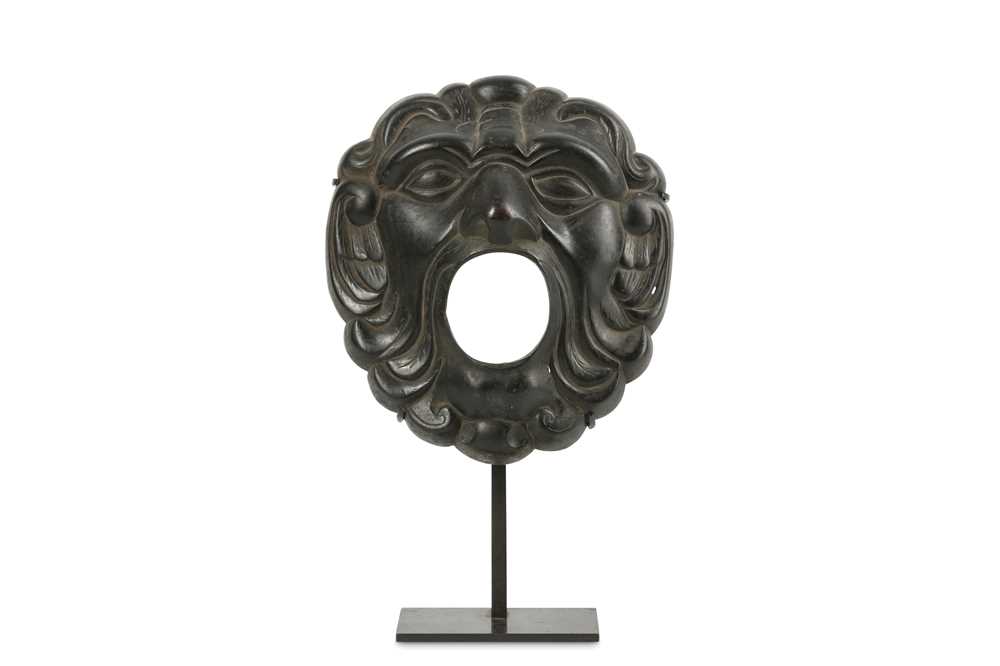 Click for high resolution
ATTRIBUTED TO HUBERT LE SUEUR (ACTIVE 1596-1658): A SECOND QUARTER 17TH CENTURY ENGLISH BRONZE GROTESQUE FOUNTAIN MASK mounted on a metal stand with rectangular base, the bronze 24cm high x 22cm wide With thanks to Dr Charles Avery for his assistance with cataloguing this lot. Comparative literature:  C. Avery, “Hubert Le Sueur, ‘the unworthy Praxiteles’ of King Charles I”, in The Walpole Society, XLVIII, 1982, pp. 135 – 209; reprinted in C. Avery, Studies in European Sculpture, II, London, 1988, pp. 145 – 235.  C. Avery, ‘Le Sueur’, in J. Turner [ed.], The Dictionary of Art, London, 1996, 19, pp. 249-50. J. Marsden, ‘Portrait Busts’, in Jane Roberts [ed.], The King’s Head: Charles I, King and Martyr, exh. cat., The Royal Collection, London, 1999, pp. 36-37. C. Avery, ‘Le Sueur’, in A. Bostrøm [ed.], Encyclopedia of Sculpture, 2004, II, pp. 952-55. The unpublished fountain-mask is an interesting possible addition to the growing catalogue of work by Hubert le Sueur, court sculptor – as he himself boasted - to two kings, Louis XIII of France and Charles I of England and Scotland. Arriving in London from his native Paris in 1624, probably in the retinue of the King’s new French bride, Henrietta Maria, by 1631 he was in the pay of the crown, and was shortly dispatched to Italy to make casts of the outstanding antiquities so that he could manufacture bronze copies for the gardens of St James’s Palace.  He was also involved in producing two monumental fountains for the queen at Somerset House, and so he was well aware of requirements in terms of bronze fitments in connection with the flow and display of water.  The present grotesque mask closely resembles those on the pauldrons (shoulder-pieces) of the armour in which several of his portrait-busts are clad. While lion’s masks were theoretically reserved for the monarch, and feature on several of Le Sueur’s busts of King Charles I, for instance those in Duke Humphrey’s Library in the Bodleian Library, Oxford, and in Wentworth Woodhouse, Yorkshire (Avery, as above, Cat Nos. 30B and 30C, figs. 55a, and 55e), Sir Peter Lemaire was also endowed with them in his bust in St Margaret’s, Lothbury (Avery, fig. 59c). In general, lesser mortals were given pauldrons with more anthropomorphic features, for instance Edward, Lord Herbert of Cherbury in 1631(Avery, Cat. no. 34, fig. 59a-b: now National Gallery of Wales and the National Trust for Powys Castle). These features resemble those on the present mask, with its exaggerated ridges over the eyebrows and continuous wrinkle running across the nose, which is broad and flattened.  The whole face is surrounded on the pauldrons by curvilinear, flattened, strap-work with separate C-curves on either side, like enlarged ears, while on the mask these function as the bony outer edge of feathered winglets.  The incised lines of patterning round the moustache of the mask and up into the hairline are similar to those decorating Lord Herbert’s gorget. It should be remembered that Hubert was son of a Paris armourer and this continued to influence his style. If it is by Le Sueur, the present mask might even be one of the ‘3 Certouses’ [three cartouches] that are now missing, but were listed in 1649-51 alongside the crowning figures - and various other easily recognizable bronze components - from the Fountain of Arethusa (formerly identified as ‘Diana’ and now in Bushy Park, near Hampton Court). This was in the inventory for the sale of the King’s Goods in a job-lot @ £500 (see Avery [1982] 1988, p. 178, for the full list of items).