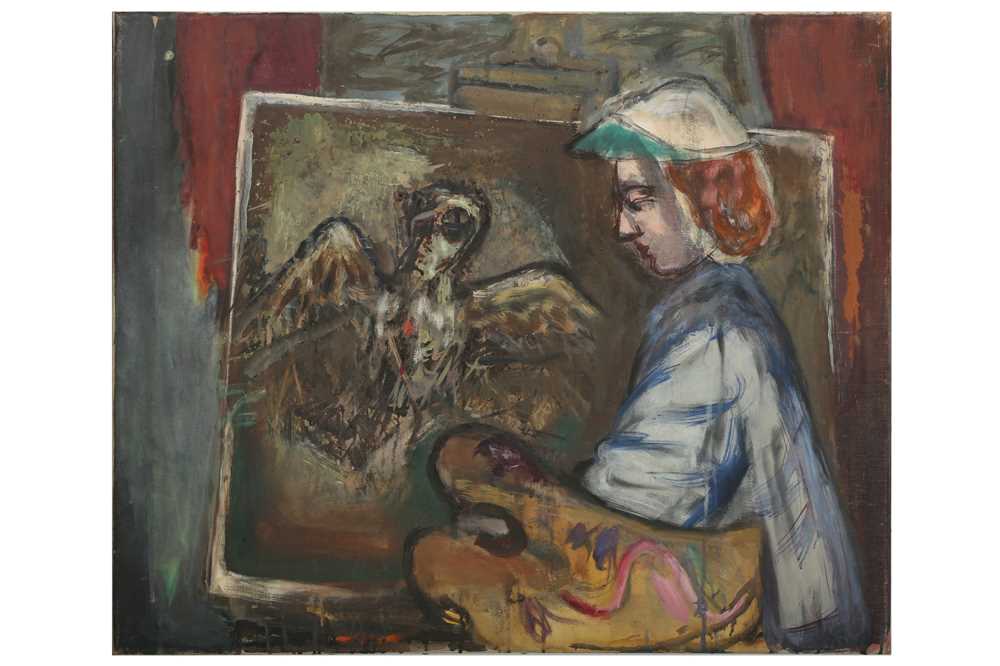 Painted in 1960. As Schlenker notes this is one of the few self portraits in which Motesiczky depicts herself as a professional painter with all the attributes of her trade (Schlenker p. 307). Marie-Louise places herself before her easel with palette and brush in hand, wearing an artist's smock and cap. The reason that she is painting what appears to be an eagle is ambiguous, but may well refer to her largest work to date, The Old Song, 1959 (Schlenker 158, Stedelijk Museum, Amsterdam). This was an allegorical subject in which ‘the ugly bird’ symbolises the husband to whom the figure ‘singing’ the song is unhappily married.

Marie-Louise’s professional identity was given a new lease of life at the beginning of the 1960s. She had a solo exhibition at the prestigious Beaux Arts Gallery and moved with her mother into 6 Chesterford Gardens in Hampstead which was to be their home for the rest of their lives. Writing to Elias Canetti in July 1960 she expressed her yearning: ‘If only I could become a painter again – that is all I hope for, and it’s not even my insight, but rather yours. This is a good room [her studio at Chesterford Gardens] – particularly at night.’ (Lloyd 2007, p.170)

Her exhibition at the Beaux-Arts Gallery in Bruton Blace off New Bond Street under the visionary and influential direction of Helen Lessore featured nearly forty of her works. The gallery had a reputation for fostering young talent. In the 1930s it had shown the work of Henry Moore, Barbara Hepworth and Christopher Wood. In 1953 Francis Bacon showed there, and exhibitions of the work of Leon Kossoff, Frank Auerbach and Michael Andrews followed soon after.

For Marie-Louise it was her first solo exhibition in Britain since the War. The reviews after the opening were wide-ranging, with the more insular British critics remarking on her 'un-Englishness'. Importantly, however it was praised by the influential art historian and critic J.P. Hodin. A fellow émigré, he was close friends with Oscar Kokoschka and immediately warmed to Marie-Louise's aesthetic. Hodin would become a good friend and powerful voice of support for Marie-Louise's work in the years to come.