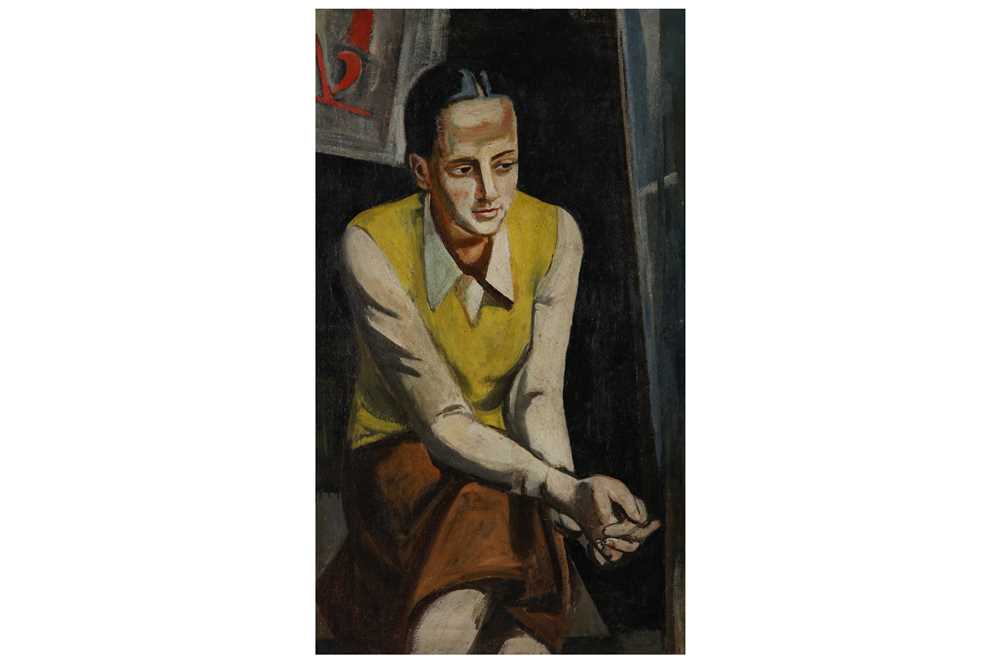 Painted in Munich in 1931, the present work depicts the right hand figure in the central panel of Hess's much acclaimed large scale tryptich Am Wasser painted in 1930 (fig. 1). First shown at the Glaspalast in 1931, the central panel of Am Wasser was illustrated in Jugend the same year (fig. 2). Much to Hess's immense distress, however, Am Wasser together with a significant portion of his other work was destroyed in a catastrophic fire at the Glaspalast two years later.

Friend I echoes many tendencies found in Beckmann’s works: the plasticity of the figure, the powerful use of light and dark, the black outlines that brilliantly carve out the form of the sitter and the use of the deliberately vibrant rich, almost garish yellow. There are also similarities with Christian Schad’s cool dispassionate Neue Sachlichkeit style: the figure glances away from the viewer, preoccupied in her thoughts, creating a haunting sense of mystery within the painting.

Another artist and friend who influenced Hess was the German Expressionist Karl Hofer. In the present work Hess explores Hofer’s interest in non-representational colours to provoke emotional responses, notably in the sitter's vibrant yellow gilet contrasting with the black background. Karl Hofer was also a skilled master of form and Hess has demonstrated this in his adept rendering of the shadowed folds of the sitter’s clothing.

Friend I was painted two years after Hess joined the progressive Juryfreie artist group in Munich. He soon became one of the group’s leaders, and during the 1930s he began to receive wider recognition with his work featured in a number of magazines.