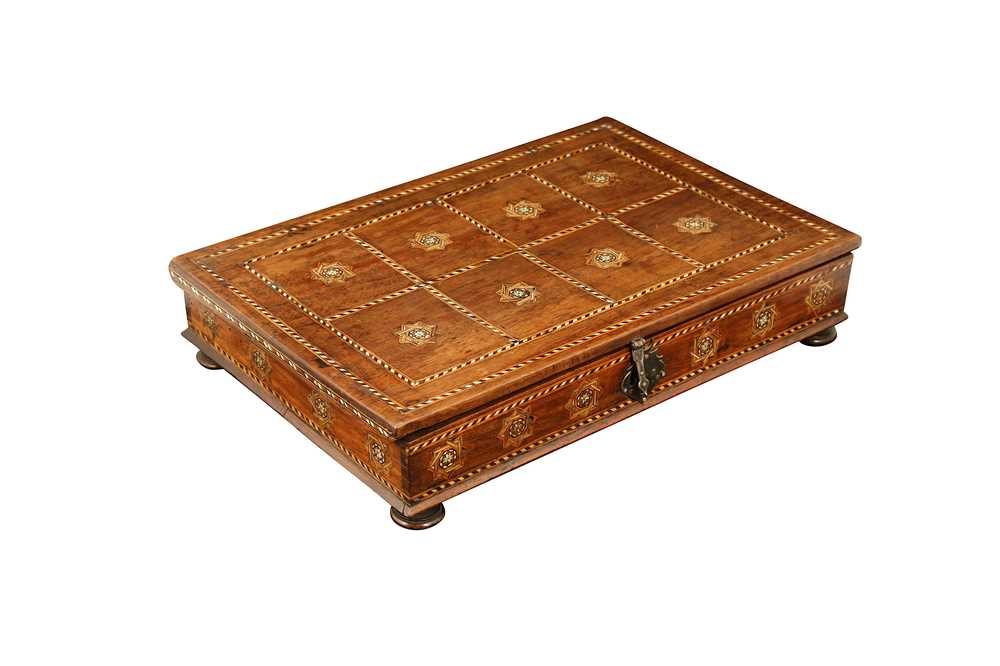 Of typical narrow rectangular shape, resting on four compressed rounded wooden feet, with a hinged lid, the exterior clad in fine marquetry work arranged in symmetrical order in the typical style of Islamic Spain with taracea granadina, comprising tesserae of bone, ivory, stained ivory, and coloured wood inlaid in a geometric eight-pointed star pattern framed within narrow two-tone fretwork bands, the interior plain except for a geometric eight-pointed star inlaid on the back of the lid, the steel lock plate and the brass hinges later replacements, 8.5cm x 40cm x 27cm.

The Spanish word taracea (marquetry), deriving from the Arabic word tarsi (to insert, inlay), describes a technique that consists of inlaying pieces of wood, bone or mother-of-pearl into a piece of hardwood, such as walnut. Material evidence confirms that this technique of Eastern origin was widely in use in Islamic Cordoba since at least the 10th century. But it wasn't until the Nasrid period (1232 - 1492) that it reached its full potential. Indeed, under the Nasrids, the technique was simplified and the elaborate geometrically-cut inlays were stuck onto a base of paper or parchment first, and subsequently stuck onto the main piece of furniture (Margarita Sánchez Llorente "Writing desk" in Discover Islamic Art, Museum With No Frontiers, 2021. http://islamicart.museumwnf.org/database_item.php?id=object;ISL;es;Mus01;25;en, last accessed 30/09/2021).