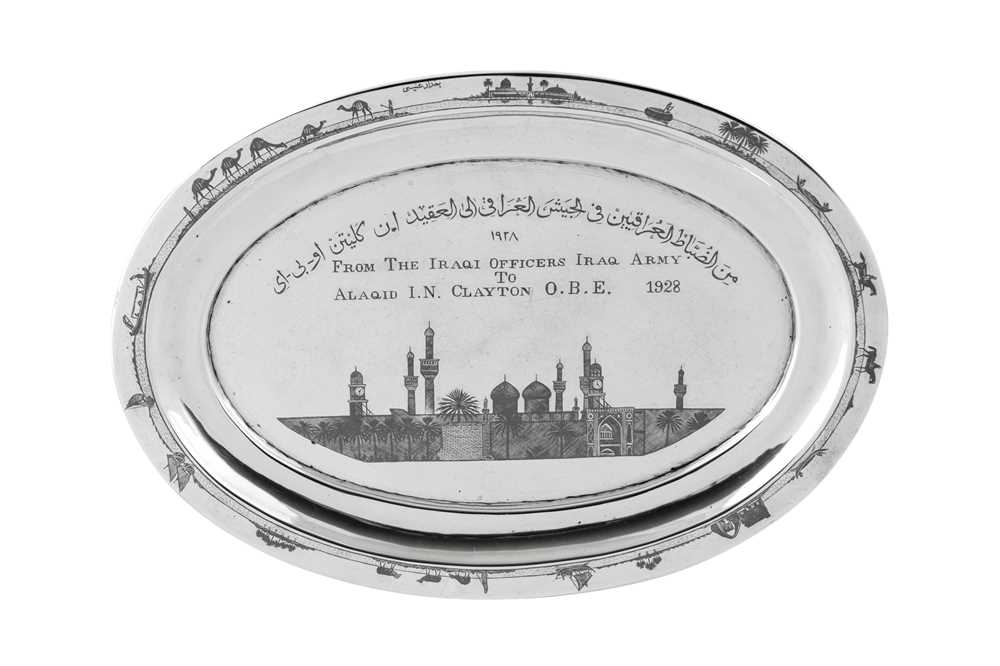 British period, of oval form with cavetto edge. The rim with nielloed scenes of the Taq Kasra (Ruins of Ctesiphon), the Mosque of the great Imam Abu Hanifa al in Nu'man, Baghdad as well as marsh Arab scenes of boats on the Tigress, camels as well as horses and riders. The centre with a depiction of the Al Kadhimiya mosque, Baghdad. The field with a niello inscription in Arabic and English, reading ‘From The Iraqi Officer Iraq Army to Alaqid I.N Clayton O.B.E 1928’. Signed to rim.

Brigadier Sir Iltyd Nicholl Clayton KBE(1886 – 1955) was a British Army officer notable for his attachment to the Middle East Office in Cairo during and after World War II and his involvement in the formation of Arab League and formulation of post-war British policy in the Middle East. Awarded the General Service Medal with clasp for Iraq; the Iraq Active Service Medal; and the Fourth Class of the Order of Al Nahda of Hedjaz on 8 March 1920.

Clayton remained in Iraq post-War, on secondment to the Iraqi Army, and served as Chief Instructor and Staff Officer to their Artillery, services for which he was created an Officer of the Order of the British Empire in 1927. Returning home, he served as Regimental Lieutenant-Colonel of the Royal Artillery from 1934 to 1938, and retired in 1939. Recalled to service during the Second World War, he served as Advisor on Arab Affairs to the British Government from 1943 to 1945, and was later Special Advisor to the Head of the British Middle East Office and served as Minister attached to the British Embassy in Cairo from 1947 to 1948.