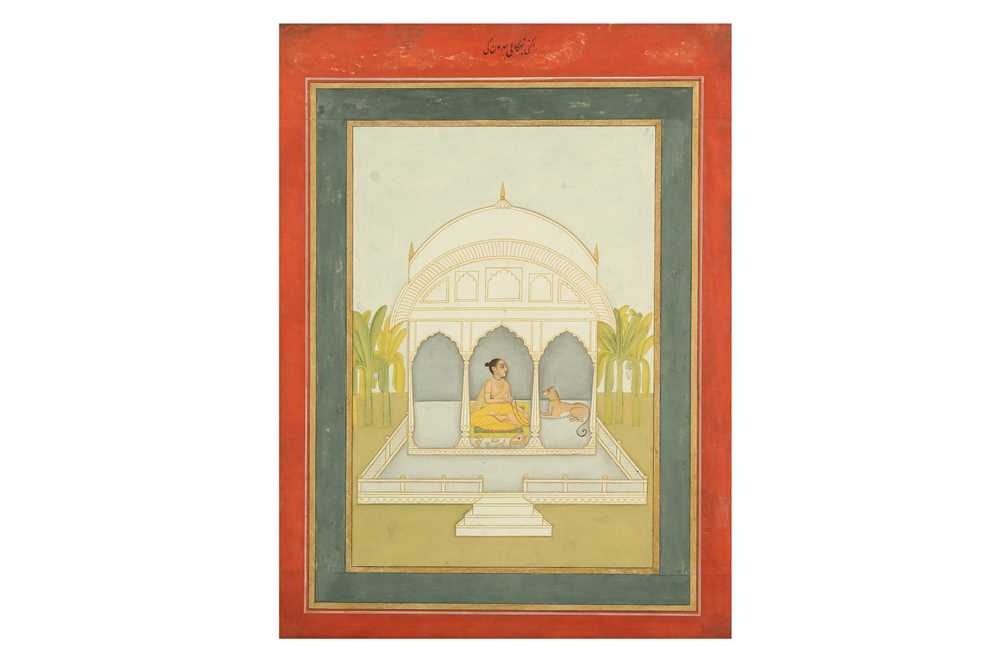 Opaque pigments heightened with gold on paper, the vertical illustration showcasing the typical composition of Bangali Ragini's Ragamalas, part of the Bhairava Raga to be sung in the mornings of the autumn season, with a seated lady in the guise of an ascetic, her forehead marked with the Shaivite tripundra, her yellow sari covering her crossed legs and the golden dupatta wrapped around her chest, holding a rudraksha rosary necklace in her hand, in front of her a quiet cheetah, the scene set in a white marble shrine surrounded by coconut trees, within black, gold and white rules and blue and bright red borders, at the top a black ink nasta'liq inscription reading Rag(i)ni Bangali Bharunki (?), mounted, glazed and framed, 36cm x 28cm including the frame.

Illustrations from Ragamala series tend to follow very precise compositional standards. Specific iconographies were developed for depicting each mode with minor variations allowed, depending on the geographical area. In the case of the Bangali Ragini, the protagonist is usually an ascetic, or a lady in the guise of one, who is depicted seated in meditation within or beside a small shrine. Prayer beads lie in the ascetic's hands, and the lower body is often covered with a yellow garment.

This description is often supported by Devanagari text accompanying the scene, like in the case of an Amber Bangali Ragini, 1709, in the Metropolitan Museum of Art's collection (acc. no. 58.1.8), which provides the following characterisation of the Ragini: "Her sari, soaked with kesara [saffron], is enchanting. [Her] musk caste mark at the forehead bewitches the mind. The lovable [woman has] matted locks and ash in her[?] palms.". All of these qualities can be easily spotted in our illustration as well. The painting of the MET also features in the back a similar inscription to ours, Bangali Bhairuki Ragini, suggesting that these Ragamala illustrations would have been collected and marked by their owners, making them easier to identify.

The cheetah is a puzzling and intriguing addition to the traditional decorative arrangement of this Ragamala. Indeed, not all Bangali Ragini feature it, but when they do, they depict him close to the Ragini and the shrine, mostly in a tamed, resting, seated pose. A Marwar Bangali Ragini, ca. 1630, in the Arthur M. Sackler Gallery's collection (acc. no. S2018.1.50) depicts the cheetah inside the shrine and the Ragini outside. It has been suggested that the Ragini could here be a prince, since he wears the pearl and ruby earrings so en vogue during the reign of the Mughal emperor Jahangir, and the cheetah may be his. The Claudio Moscatelli's collection of Ragamalas featured another illustration with the cheetah inside the shrine, which was part of the dispersed 'Berlin' Ragamala series (see C. Glynn, R. Skelton, A. L. Dallapiccola, Ragamala, Paintings from India from the Claudio Moscatelli Collection, London, 2011, cat. 13, pp. 64-65). The painting was successfully sold at Christie's London, 25 May 2017, lot 3.

This work has been attributed to a Ragamala series most of which is preserved in the Chester Beatty Library in Dublin. Linda Leach states in Mughal and Other Indian Paintings from the Chester Beatty Library (1995, p. 627) that this series could have once belonged to the wife of Sir Elijah Impey. If that was the case, the choice of including the cheetah in the depiction would be in tune with the Impey family's fascination with the indigenous fauna and flora of the Subcontinent, a passion which converged into the Company School painting masterpiece known as Impey Album. For further reference on this album and its renowned Cheetah painting, please see W. Dalrymple, Forgotten Masters: Indian Painting for the East India Company, 2019, p.51.

36cm x 28cm including the frame