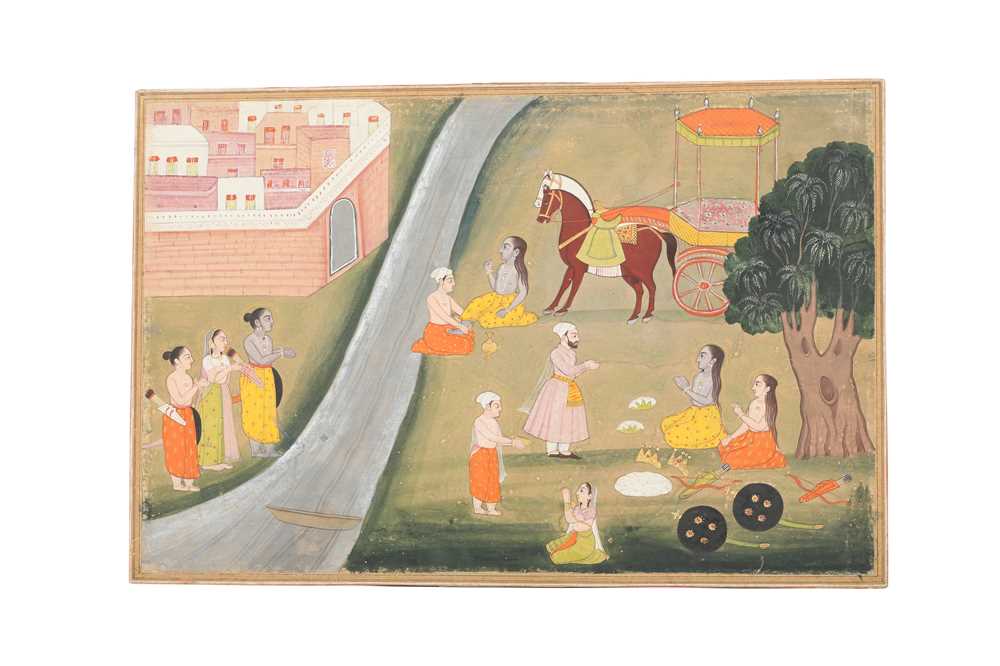 Opaque pigments heightened with gold on paper, the horizontal composition depicting different moments and encounters of the three leading characters of the Ramayana epic, Rama, his wife Sita, and his brother Lakshmana, upon their return to their hometown of Ayodhya, after rescuing Sita from Ravana, the evil king of Lanka, the scene set within black rules and thin golden borders, the recto plain except for an old inventory sticker of the Grand Hotel in Calcutta, 22.4cm x 33.2cm.

The composition is organized in chronological order from left to right, as if it was a comic strip and the story was unfolding under the viewer's gaze. The trio is about to cross the river to finally get home, after 14 years in exile. Around their heads, flaming golden haloes symbolise their divine nature and emphasise their roles as heroes. Once returned, they are greeted, welcomed and treated by the locals as the rightful rulers of Ayodhya: Rama's feet are being washed by a courtly attendant; a royal palanquin in the background is awaiting them; a well-dressed courtier offers Rama and Lakshmana their lotus crowns while they sit underneath a tree. The composition is rich in details and emotions, but it is also wisely laid out, giving the viewer enough time to dwell on each scene and rejoice in Rama's return.