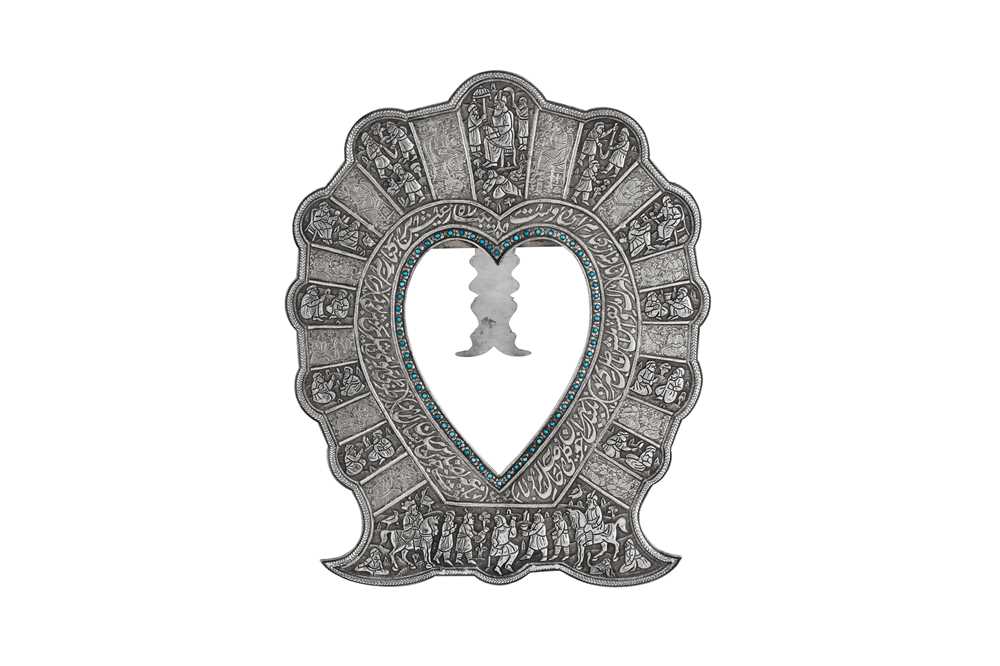 Qajar dynasty. Of lobed oval form with outswept feet. The central aperture of heart shaped edged with a course of inset turquoise, edged with a band of chased monabbat-kari calligraphy in Nast'aliq script of three lines (six Persian half-lines) relating to loss and regret. The outer section with alternating panel of chased monabbat-kari decoration in the Shirazi style and engraved ghalam zani decoration in the Isfahani style. The top central panel with a seated King Darius with a fan bearer and a servant holding a parasol, the alternating chased panels depicting figures, most seated in conversation, the base section chased with Shirin bathing, her attendant holding an amphora of water, being approached by Khosrow on horseback. The engraved panels with seated figures, some holding libations. Easel backing. Marked to back of easel with workshop mark Amal-e Ja'far عمل جعفر (the work of Ja’far) and with marked with French swan guarantee mark (swan used 1893-1970).

"Since the departure on my beloved, all manner of joy and comfort have been denied me.

The parrot was happy with his sugar lump, yet the winds of destruction would deny him his small pleasure.

The nightingale praised the beauty of the rose joyously, death arrived and destroyed all traces of his desires."

There is a significant corpus of silverware marked for Ja’far, the range of wares covering tea sets and trays, cigarette boxes, beakers, chargers, condiments, card cases and cocktail shakers. Dated examples are known from at least the 1920’s yet the style of the decoration can be associated with the very end of the 19th century until the 1930’s. There are two main groups of decoration for wares marked Ja’far; those with figures, drawn upon Safavid paintings either shown in courtly group scenes with musicians or as individuals, then there are those with dense foliage populated with nightingales gol-o bolbol. It is probable that Ja’far was both a manufacturing workshop and a retailer, silver bearing this mark is seen in both Isfahan style engraving and the chased figural work of Shiraz. Some of the finest wares combine both these styles on the same piece suggesting that Shirazi craftsmen may have been employed in Isfahan. There is only one version of the Amal-e Ja’far mark, evidently the first encameo cut steel punch used in Persian silverware, this is an uncommon occurrence in proficient silver producers as punches do soften and even break over time.