A LOUIS XVI SECRETAIRE A ABATTANT, BY PIERRE ROUSSEL 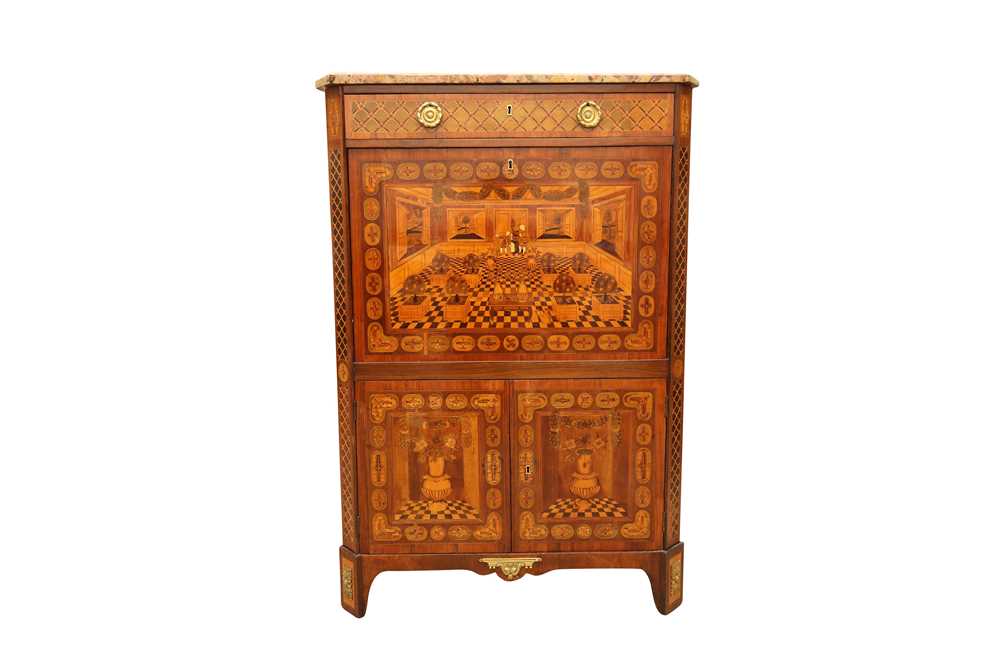 A LOUIS XVI SECRETAIRE A ABATTANT, BY PIERRE ROUSSEL

A LOUIS XVI SECRETAIRE A ABATTANT, BY PIERRE ROUSSEL (French, 1723 - 1782), circa 1770s, with exceptionally fine marquetry in cherrywood, tulipwood, rosewood, amaranth and various other woods, depicting an Orangerie, the pale red marble top over a long frieze drawer with ormolu ring handles, the drawer front with a reticulated pattern, each junction set with a four petalled flower, over a fall front decorated with a wide banded border with repeating foliate roundels above tied swags hanging as if twisting around the upper border of a detailed scene of an orangery with three figures gathered at the door, four further windows with open shutters line the remaining wallspace of the room revealing landscapes beyond, concealing an interior with two banks of three drawers and an arrangement of pigeonholes, to the lower section the double doors bear similarly composed marquetry panels, though centered with detailed close ups of vases of flowers, flanked by canted corners decorated with foliate motifs above long reticulated panels punctuated with foliate roundels, and side panels depicting urns wrapped in leafy garlands, all standing on rectangular ormolu mounted feet flanking a shaped apron with a further foliate brass mount, stamped to the top 'P ROUSSEL' beneath the marble top

The inside of the drawer bears a paper label for George Trollope & Sons (founded in 1778).

Roussel was named a master cabinetmaker in the Corporation des Menuisiers-Ébénistes in 1745 and rose within the guild throughout much of the second half of the 18th century. A key benefactor of Roussel was the Prince of Condé who commissioned many pieces for the Palais Bourbon and Château de Chantilly. This piece is in the transitional style and is a later production from the Roussel workshop.

It was common for Roussel to subcontract out the marquetry work employed on his pieces to a range of prominent ebenistes of the period such as N. Petit, P. Roussel, A. Gilbert and D. Deloose. These marquetry sections were seldom the same size which implies the ebenistes made them up in advance without a specific commission in mind.

The elaborate pictorial marquetry of this piece bears the characteristic features of the work of renowned craftsman André Louis Gilbert (1749-1809). His compositions often centred on a portico, an arcade or a temple as can be seen on the front sections of this example.

A comparable example, with a similar stamp, can be found in the Metropolitan Museum of Art (Accession Number 58.75.53)

Another comparable can be seen in: F Lewis Hinckley, A Directory of Antique Furniture plate 473, page 153

Apart from the pictorial marquetry the ormolu mounts can be compared with a commode attributed to Gilbert, formerly in the Collection of Ailsa Mellon Bruce, sold Sotheby Parke Bernet, New York, 6 May 1977, lot 159; Christie's New York, 26 October 2001, lot 414.