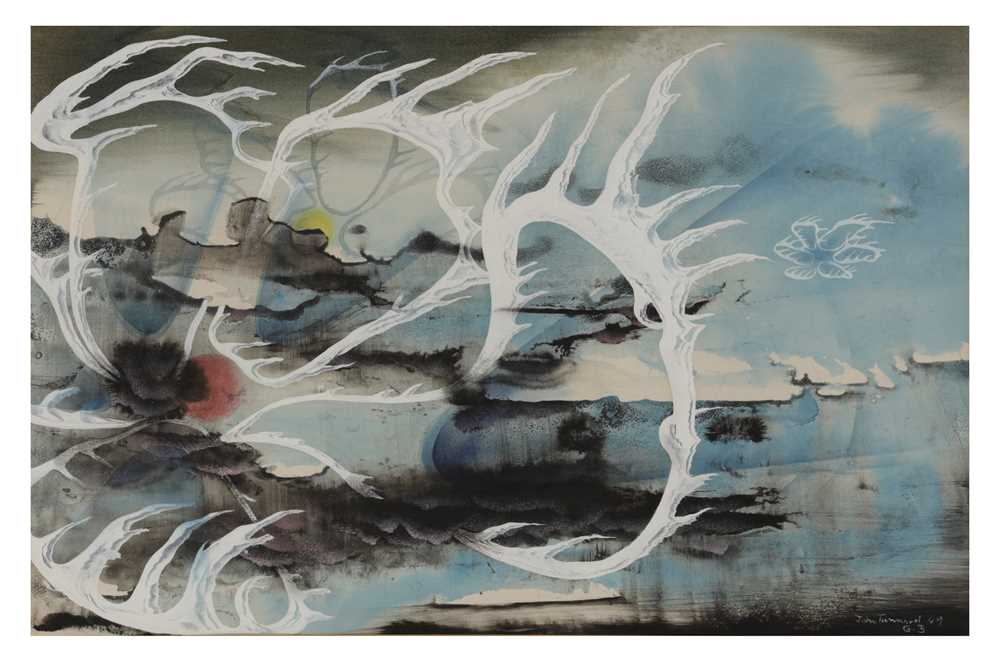 PROVENANCE:
with The Lefevre Gallery, London

John Tunnard, who had studied design at the Royal College of Art, moved to Cornwall with his wife in 1933 and, apart from one short period, stayed there for the rest of his life. As with many other artists in Cornwall, Tunnard's work was profoundly affected by his surroundingsIn the early 1930s the paintings were near-realistic, but by the mid-1930s and after became increasingly abstract.

In 1936 he is believed to have visited the infamous International Surrealist Exhibition at Burlington Galleries and was also know to possess Herbert Read’s seminal book Surrealism, given to him by his wife Bob, which he is recalled to have exclaimed ‘It’s all in there; it’s all in there’ (quoted in S. Martin, John Tunnard Inner Space to Outer Space, Chichester, 2010, p. 17). Although never officially becoming a member of the British Surrealist group, Tunnard did develop his own mode of abstract Surrealism, which was no doubt informed by his friendship with John Trevelyan, who had been acquainted with artists such as Joan Miró and Alexander Calder while living in Paris in 1931-34. Herbert Read stated, ‘Tunnard is, of course, a surrealist if that word has any precise meaning. He has not actively participated in the Surrealist Movement as such, but if surrealist is to be defined, in the phrase of André Breton, as ‘pure psychic automatism’, then I know no artist who has more consistently practiced surrealism. In comparison the automatism of Dalí or Max Ernst seems ‘contrived’ (Read quoted in ibid., p. 18).

Tunnard did not see his works, however, as being purely abstract and void of representation. He in fact saw that they were reflective of his life. However, there was less of the menace of War and more of natural events and the plants and animals. Sea Antlers is a great example of his equal fascination by the sea in the years immediately after the war as he had been when he was a wartime coastguard, taking inspirations from his Cornish surroundings.

When discussing his process he stated, ‘As soon as I started inventing, I found that it was so much more exciting, and that inventing came gradually into what was called non-representational painting. But even when I am at work on a picture, I do not feel that what I am putting down is exactly non-representational. I do feel it is something that does exist, and I am quite alarmed sometimes when I show a painting to somebody and find that they cannot see as it as I do. I feel that these objects are quite real to me, although they may not be in the three-dimensions of the canvas’ (quoted in 1944 in an interview with Raymond Myerscough-Walker, in ibid., p. 16).

The 1940s marked one of the most prolific and successful periods of Tunnard’s career, when he began to make a name for himself internationally. In March 1939 he held a solo exhibition at Peggy Guggenheim’s London gallery Guggenheim Jeune. From this point on Guggenheim became a key supporter of the artist, describing his gouaches as being ‘as musical as Kandinsky’s, as delicate as Klee’s, and as gay as Mondrian’s’ (quoted ibid., p. 14). During this time he was included in a number of British Council exhibitions, which were sent to Australia, New Zealand and the United States, where he became widely recognised. In 1942 he was included in Guggenheim’s Art of the Century Gallery and in 1944 he held his first solo exhibition at the Nierendorf Gallery in New York, with many of his works remaining in the collections of American institutions such as the Solomon Guggenheim Museum, the Brooklyn Museum and the San Francisco Museum of Modern Art.

We are grateful to Dr Brian Whitton for his assistance in cataloguing this lot.