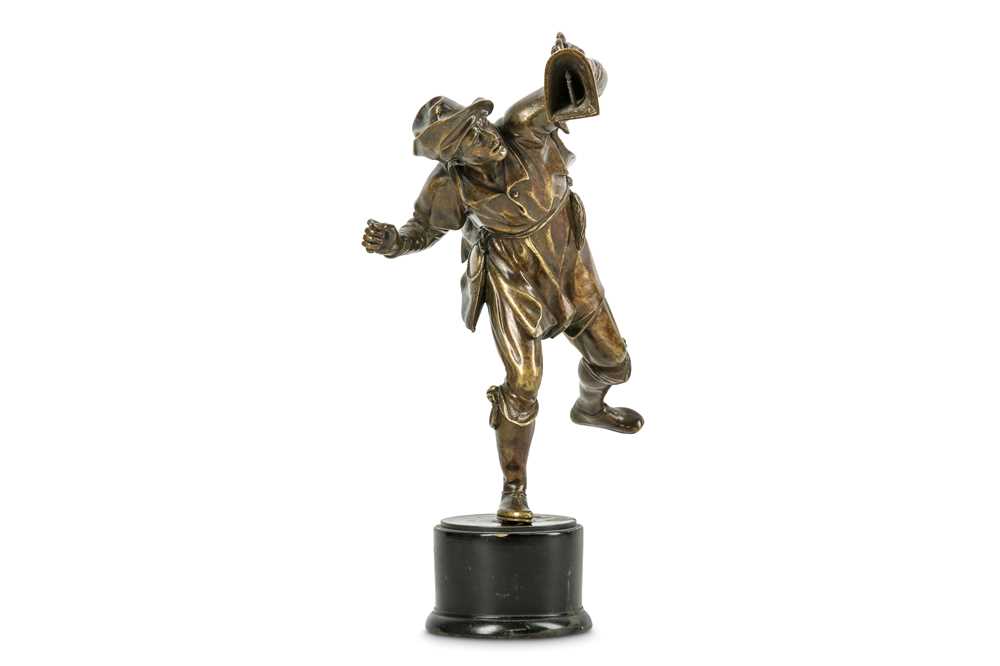 Click for high resolution
A BRONZE STATUETTE OF A FOWLER, PROBABLY GERMAN FIRST HALF OF THE 17TH CENTURY, AFTER A MODEL BY GIAMBOLOGNA (FLORENTINE, 1529-1608) the huntsman, wearing thick protective apparel, is out to catch little birds in a dark wood by the light held up in his left hand with the racquet or bat now missing from his right. Balanced on one foot, this is a unique variant of the standard model of Fowler called ‘Type A’, raised on a carved ebonised cylindrical plinth, the bronze 28.5cm high, 35cm high overall With thanks to Dr Charles Avery for his assistance with this catalogue entry. This composition by Giambologna is well-known: one of the best casts is in the Robert H. Smith Collection, Arlington, Virginia (and/or National Gallery of Art, Washington, D.C.), while an early, documented, one – complete with miniature oil-lamp and racquet - is in the Louvre Museum, Paris (no. 78 of the former French Crown collection). Another, in the Museo Nazionale del Bargello, Florence, on a terrace with plants, was perhaps finished by Giambologna’s successor as court sculptor to the Medici, Pietro Tacca (1577-1640); while several crisply modelled and incisively chased casts are held to be by Antonio Susini (d.1624). The subject of a fowler with a lantern and bat features in both lists of authentic bronze statuettes by Giambologna, that drawn up by Markus Zeh (or Zäch) in 1611 and by Filippo Baldinucci in 1688.  The Fowler is the biggest and most impressive of the three main models of genre figures produced by Giambologna, the others being figurines of the Bagpiper seated, and the Shepherd with a drinking-barrel.  Genre-figures like these had long featured in German and Flemish wood-sculpture as being ‘ordinary people’, frequently in the guise of the shepherds attending Christ’s Nativity, or as bystanders in scenes of Christ’s Passion.  They had been popularized by the engravings of Dürer, among others.  The identification with nature, agriculture and the ‘simple life’ which is characteristic of the Tuscan, even when an aristocrat - in self-conscious emulation of the ancient Romans - led to an interest in artistic renderings, such as the hunting tapestries produced in the Medici Manufactory and marble or bronze statues showing peasants at work or play to be placed for fun in natural settings in gardens.   Though unfamiliar to the 21st century observer, ‘bat fowling’ (as Shakespeare calls it – using bat in the same sense as a cricket bat) was a popular sport and livelihood in the Renaissance. It involved attracting little birds in the dark woods with a special lantern, consisting of an oil lamp surrounded by a semi-conical shade, open at the front - and then stunning them with a bat of woven withies, like a primitive tennis racquet.  Few examples are complete with the fowler’s full set of accoutrements, as they were separately fashioned and then attached. One can only surmise the reason why the foundry-man or his patron decided to change the standard lunging pose of the Fowler, with both feet on the ground, to this one, balanced on one leg and with his rear foot in mid-air: it adds a feeling of tension, as the huntsman reaches out perilously after his fluttering victim.  It may have been in order to set it atop a domed or pyramidal piece of furniture to act as an eye-catching finial, like the Architecture - also after Giambologna - that crowns the Fitzwilliam Coin Cabinet of c. 1750, now in Oxford (see N. Penny, Catalogue of European Sculpture in the Ashmolean Museum, 1540 to the Present Day, I, Italian, Oxford 1992, pp. 41-42, no. 35). In such a position it would also have echoed amusingly – with its peasant’s workaday attire - the standard pose of Giambologna’s classically nude Mercury, or the graceful female figures of Fame with her trumpet, or Fortune, that crowned turrets or domes on many a grand building of the period. Literature: C. Avery and A. Radcliffe (eds.), Giambologna, Sculptor to the Medici, exh. cat., Arts Council of Great Britain, London, 1978, nos. 130-33; C. Avery, Giambologna: the Complete Sculpture, Oxford, 1987, p. 266, no. 112, pl. 40-41; A. Radcliffe and N. Penny, Art of the Renaissance Bronze, 1500-1650.  The Robert H. Smith Collection, London, 2004, no. 25.