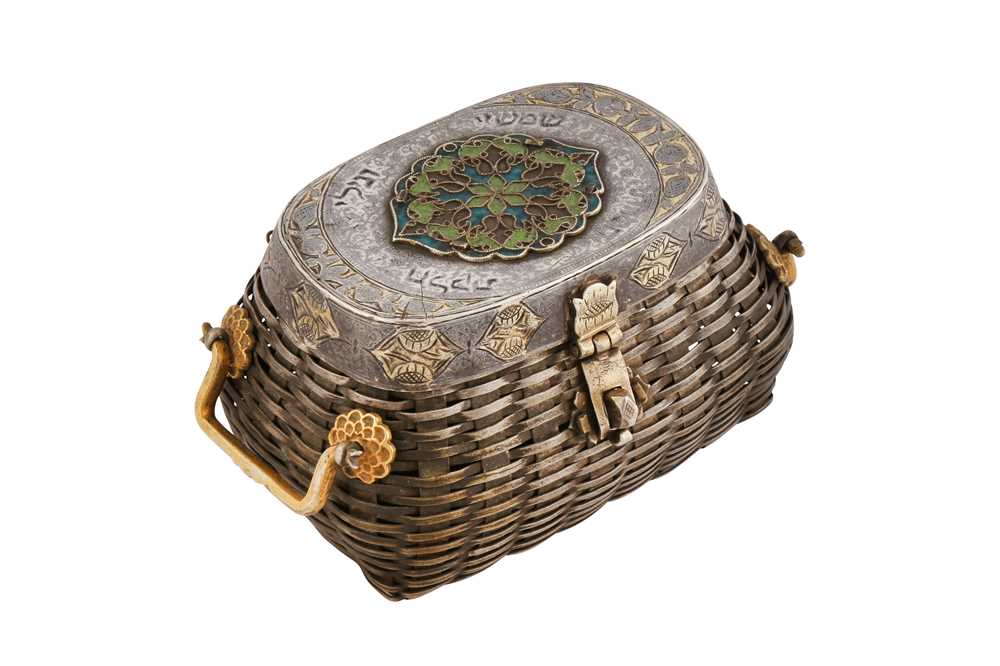 Judaica. Woven body with a hinged lid with niello decoration heightened with gilt engraved foliate reserves. The lid with a blue and green cloisonné enamel mandala, framed with text in Hebrew including תָא (compartment) the other names, with foliage. Hinged catch to the front, opposable twin gilt handles with rosette junctions to each side.

For a thorough discussion on surviving pieces of gilt niello silver from Trikala, Thessaly, Northern Greece, see Ballian, A., (2015), Silverwork Produced in Ottoman Trikala (Thessaly): Problems of Taxonomy and Interpretation in Ottoman Metalwork in the Balkans and in Hungary. Ed. Iboyla Gerelyes and Maimillian Hartmuth. Hungarian National Museum, Budapest.

Examples using this distinctive blue-green enamel within filigree borders (cloisonné) are illustrated on the Gospel cover, made by Demos from Retziani in 1664. (Monastery of Zoodochos Pigi, Andro) f.11-12. The use of niello work with tightly worked florals interspersed with text is illustrated with the Standing censer, once in the possession of the Church of St. Paraskevi, Trikala. (Monastery of St. Nikolaos in Sora, Andros), f.6-7.

A historical Jewish community exists in Trikala to this day, originally arriving in the Byzantine period, but later from Spain following the Inquisition. In 1749 a fire destroyed much of the city including the Jewish quarter and synagogues.