AN ILLUMINATED MANUSCRIPT OF A DISPERSED KHAMSA OF NIZAMI GANJAVI
Iran, dated 1650 and 1651, with later illuminations 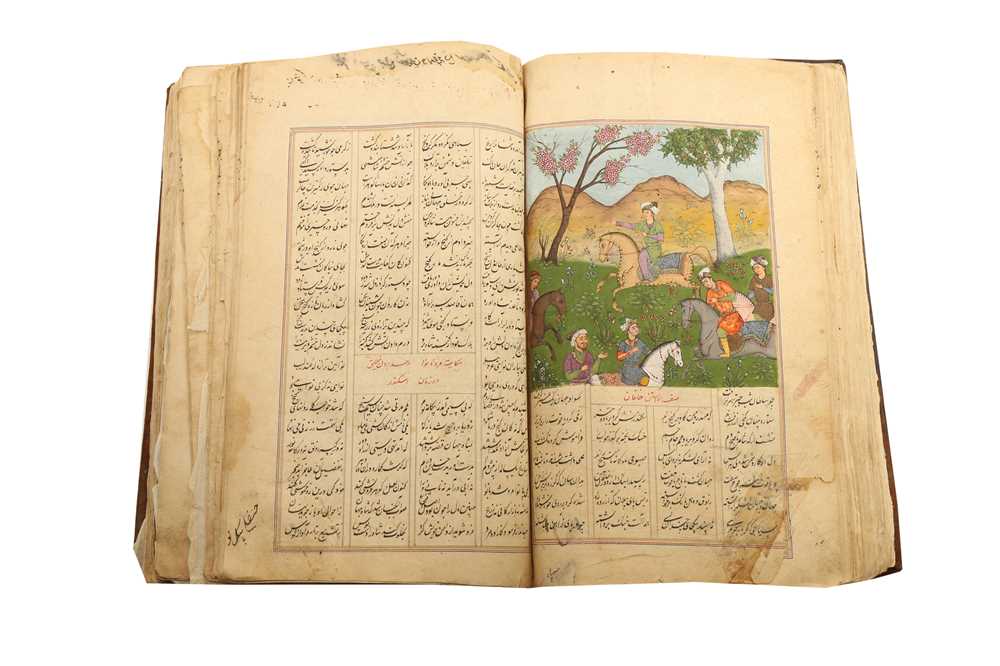 AN ILLUMINATED MANUSCRIPT OF A DISPERSED KHAMSA OF NIZAMI GANJAVI
Iran, dated 1650 and 1651, with later illuminations

AN ILLUMINATED MANUSCRIPT OF A DISPERSED KHAMSA OF NIZAMI GANJAVI, INCLUDING THE SHARAF NAMEH, HAFT PEYKAR, ISKANDAR NAMEH, AND LEYLA O MAJNUN
PROPERTY FROM AN IMPORTANT EUROPEAN PRIVATE COLLECTION
Iran, dated 1060 and 1061 AH (1650 and 1651), with later illuminations

The present tome contains more than half of the five books of the Khamsa arranged in peculiar pagination, disregarding the traditional order of the romances. Moreover, the Iskandar Nameh (made up of the Sharaf Nameh and Iqbal Nameh) appears to be split by the Haft Peykar. The end of the first book is dated 1061 AH (1651), the second and third ones 1060 AH (1650), and the last is undated. The Makhzan-e al-Asrar, and Khosrow o Shirin, traditionally the first two books of the five, must have been bound separately. The seven illuminations present in our manuscript seem largely unrelated to the text they accompany.