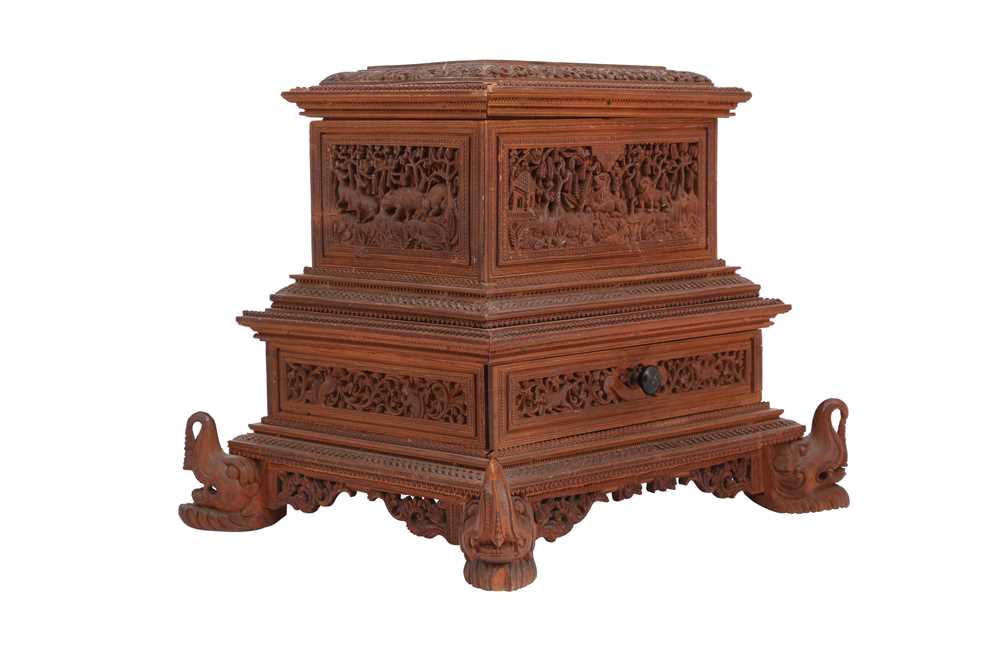 Of rectangular shape, built as a stepped jewellery chest and possibly used as a dowry box, resting on four projecting feet carved in the shape of mythical makaras, the stepped pedestal including a long and narrow drawer with a later-replaced rounded wooden pommel, the exterior and removable lid intricately and finely carved with both figural and animal decoration, each side of the body enhanced with two rectangular panels, the largest at the top featuring a great variety of wild animals including lions, snakes, squirrels, monkeys, gazelles, hares and buffalos in naturalistically rendered jungle landscapes, one panel even featuring a small jungle hut, the narrower panels on the stepped pedestal with more animals, mostly herbivores, against stylised scrolling vegetal trellis and foliage, the lid carved with an intricate and unusual village scene with several jungle huts and two villagers, one seated on a high chair and the latter on a ladder on a tree, each decorative panel framed within several concentric frames of minute and crisp vegetal motifs and fretwork bands, the interior mostly plain except for a rosette medallion on the interior of the lid, 27cm x 31cm x 24.5cm.

This casket embodies the unparalleled artistry of South Indian carpenters, the Gudigar, and their sandalwood carving skills. Southern Indian territories, especially Tamil Nadu and Karnataka, were renowned for their intricately carved sandalwood creations, often bought and commissioned by Western travellers as souvenirs from those distant lands. In particular, the city of Mysore gained a strong reputation as the main centre of production for original and inventive creations in this media, not to mention the home of Mysore Sandal Soap, the only soap in the world made from 100% pure sandalwood oil, showing an unbroken tie between this city and the precious wood since pre-modern times.

The world 'gudi' stands for temple in Kannada and the 'gudigar' was an artisan or craftsman specifically trained and skilled in carving wooden lintels and columns, painting panels, sculpting and moulding earth to prepare idols, all traditional arts associated with Hindu temples. Mysore Gudigar were considered the most experienced in the art of sandalwood carving. In the 19th century with the arrival to India of many foreign travellers, the Gudigar started regularly producing articles to satisfy growing European demand. Some of their creations even landed in the World Exhibitions in London and Paris as early as the 1850s. Caskets similar to our lot in terms of shape and decorative vocabulary have successfully been offered in the London auction market in the last fifteen years, please see Bonhams London, 19 April 2007, lot 427; and Christie's London, 10 June 2013, lot 286; 10 October 2014, lot 102; and more recently 25 May 2017, lot 86. The casket of Bonhams presents exactly the same shape and an almost identical decorative program, lacking however the figural element of villagers and their huts, which is rendered in such a charming and naturalistic fashion in our example.