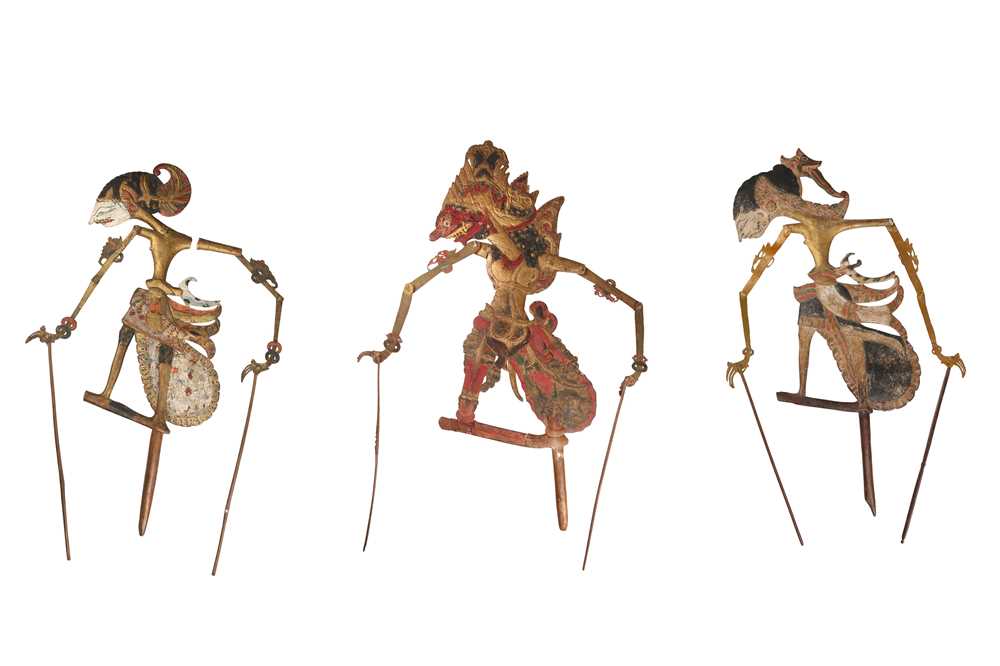 Comprising three wayang klitik (flat wooden) puppets of traditional Javanese local epics and tales including Prabu Rahwana, Damarwulan, and one of the many raden (king's sons or princes), designed in a stylised anthropomorphic shape, the body made of wood and the movable arms of leather, and painted with opaque pigments, white wash and gold, the body prolonged into a thin rounded wooden pole and the arms attached to wooden sticks to enhance the puppets' mobility, each puppet characterised by different adornments, accessories, hairstyle, attire, and physiognomy, the longest 65.5cm.

Wayang klitik (also known as wayang karucil) puppets are one among the several types of shadow theatre (wayang) puppets part of the incredibly rich Javanese heritage. Their bodies are usually made of wood, differently from the leather-made figures of wayang kulit, but in order to keep them as entertaining and movable as their counterparts, and to avoid frequent breakages and expensive repairs, their arms are made of leather, exactly like the wayang kulit characters.

It is believed that these puppets were originally produced in the territories of eastern Java, where most of the tales in which they feature are taking place. A very good example is the epic of Damarwulan, a local hero from Majapahit who brings down a mighty enemy of Majapahit's beautiful queen, Sri Ratu Kencanawungu. The hero is presented in our lot wearing a traditional sarong around his waist, the kris dagger tucked in, bare chest and with a gently curved aquiline nose. Other shadow puppet plays derived from renowned Hindu epics like the Mahabharata and the Ramayana, which were revisited and blended into autochthonous lore. An example of this is the Prabu Rahwana puppet in our lot, the Javanese variant of the evil king of Lanka Ravana featured in the Ramayana (here the king of Alengka), whose kidnap of Princess Sinta (Rama's wife) triggers a long and strenuous conflict between Rama and the evil king.