A LACQUERED PAPIER-MÂCHÉ PEN CASE (QALAMDAN) WITH SCENES OF THE ESCAPE TO EGYPT
Iran, 19th century 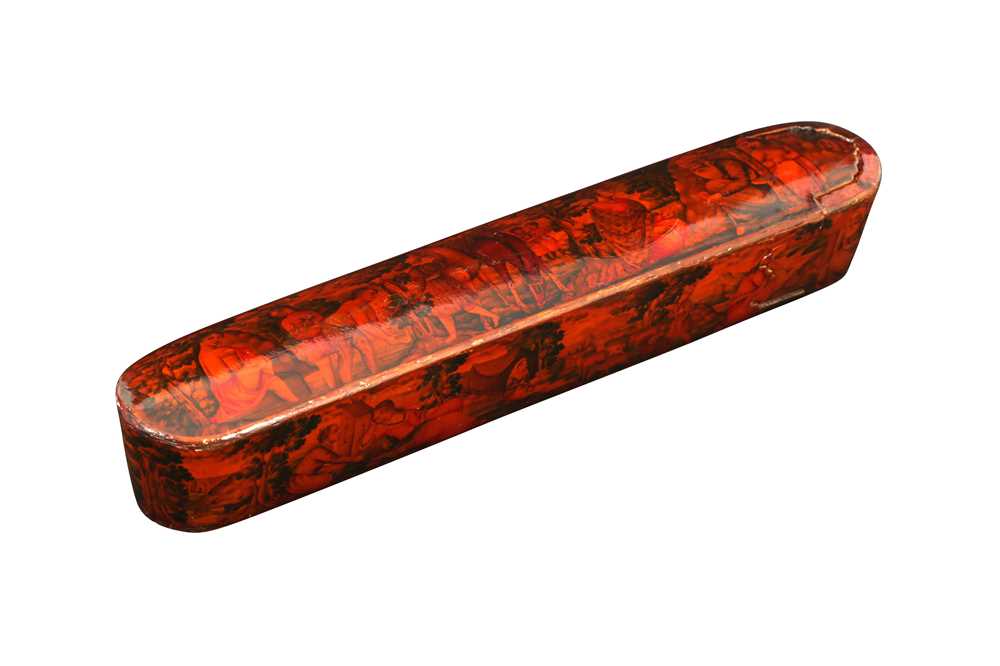 A LACQUERED PAPIER-MÂCHÉ PEN CASE (QALAMDAN) WITH SCENES OF THE ESCAPE TO EGYPT
Iran, 19th century

A LACQUERED PAPIER-MÂCHÉ PEN CASE (QALAMDAN) WITH SCENES OF THE ESCAPE TO EGYPT
PROPERTY FROM AN IMPORTANT EUROPEAN PRIVATE COLLECTION
Iran, 19th century

With rounded ends and sliding tray, lacquered, polychrome-painted and heightened in gold, the top and sides painted in a horizontal composition with a variety of typical figural motifs including the visit to a sage, a naked lady's bath, relaxing moments immersed in nature, and a few scenes reminiscent of Mary and Joseph's escape to Egypt with a lady wearing a headscarf and holding her hands on her womb, seated outside a tent, her companion attending the sheep and preparing food, the top later signed in black Ya Sadiq Al-Wa'd (Muhammad Sadiq, active 1740s–90s) and featuring a partial date 112 (1112?), possibly a production from the circle of Muhammad Sadiq, the sides of the sliding tray and the underside of the case painted in gold with dense vine trellis and ripe grape bunches against a red ground, the interior of the case marked with a gold ownership stamp in relief reading Mohammad Javad Abdul Ar-Raji and dated 1238 AH (1822), 23.5cm long.

The compositional arrangement, choice of subjects, and overall pictorial style of this qalamdan share an affinity with the lacquer productions attributed to the celebrated artist Muhammad Sadiq of Isfahan, a gifted pupil of Muhammad Ashraf whose work flourished from 1128 - 1177 AH (1716 - 1764). Sadiq is primarily known for his lyrical subjects, revealing his great skill as a portraitist. Our qalamdan presents several analogous stylistic features of a similar pen case in the Khalili Collection (LAQ 320), also attributed to Muhammad Sadiq (N.D. Khalili, B.W. Robinson & T. Stanley, Lacquer of the Islamic Lands, Part One, London, 1996, cat.97, pp.134–5). In particular, the scene of the young prince in conversation with a sage next to a tree (right end of the top) looks like an almost mirroring image of the same scene on Khalili's pen case.