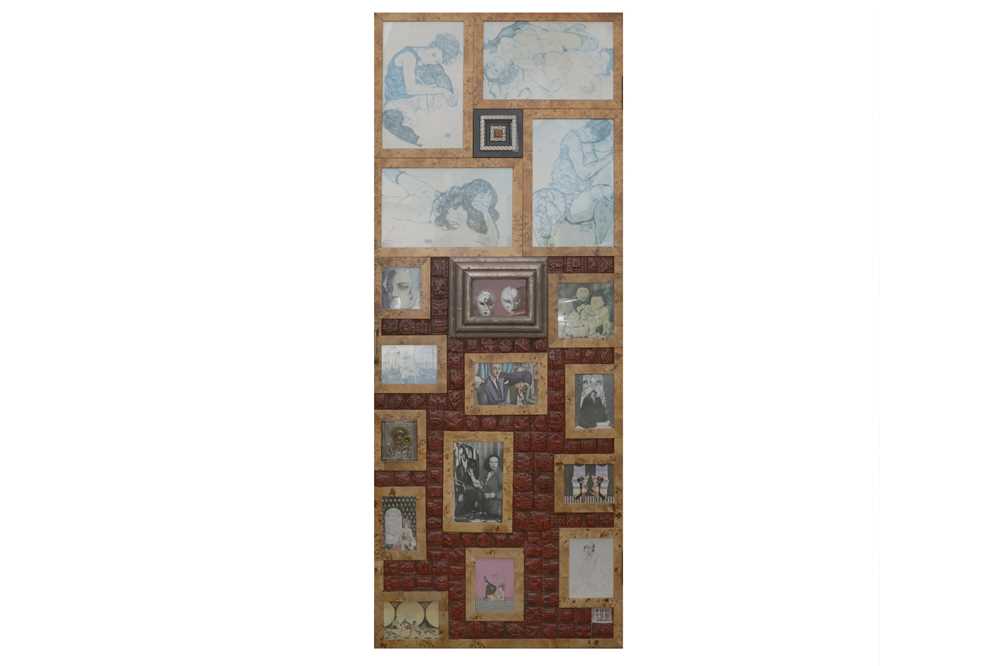 RON HITCHINS (BRITISH, 1926-2021): A embellished pantry door from the artists house, second half of the 20th century, the upper section decorated with a series of prints by Egon Schiele, within birdseye maple frames, the lower section with further decorative works flanked by Hitchins' abstract handmade terracotta tiles

Born in the 1920s in London, Ron Hitchins moved to Hackney aged 13 and started a market stall on the infamous Ridley Road, selling brightly coloured clothes, he invented the button down shirt and flared trousers. Known as ‘The Flash’ he was a colourful character in London’s East end. Eventually he started to design small terracotta necklaces with interesting abstract designs that he sold on his stall. From this a developed a career as an artist. He primarily designed wall hangings that were composed of a selection of individually designed terracotta tiles. Apart from terracotta he also worked with fibreglass. His designs were often inspired by foreign design influences, notably Aztec.Although much loved as an artist, Hitchins was first and foremost known as an avid Flamenco dancer. He almost single-handedly introduced London to this form of dancing and until his death in 2019 he remained an active member of the Flamenco Dance scene. Claudine Roux, Andrew Tullis and Lucy Cash directed a short film about his life called ‘Made in Hackney’ which can be viewed here.