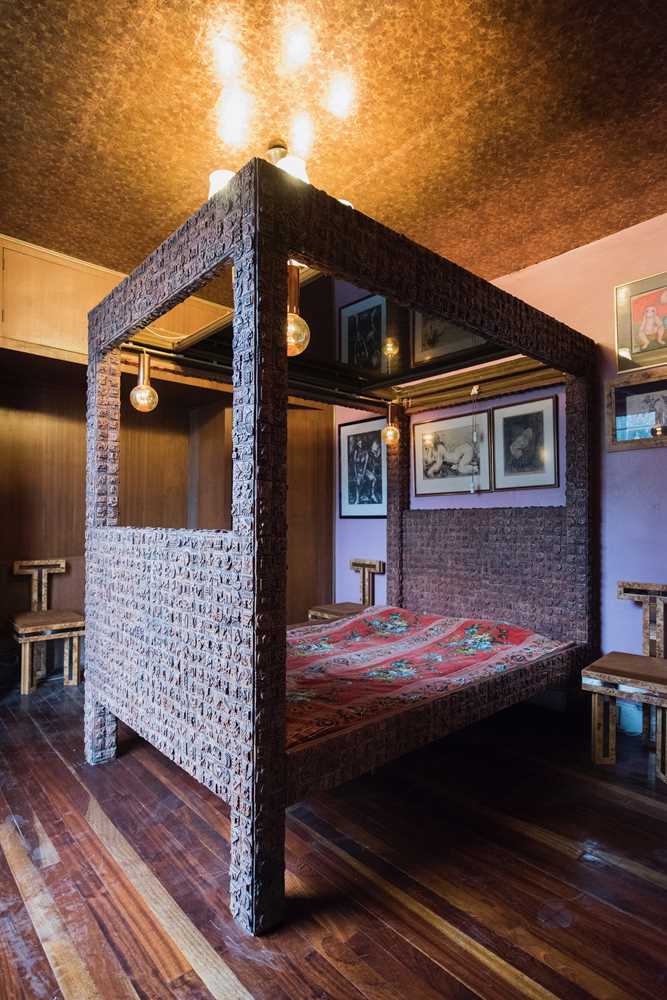 RON HITCHINS (BRITISH, 1926-2021): A four poster bed, second half of the 20th century, of square brutalist form, decorated with panels consisting of 3582 abstract handmade terracotta tiles, approximately two inches square, applied to a deal wood frame, some signed by the artist, the overhead canopy with mirrored inset and rope mechanism for integrated lighting and curtains (curtains not included), together with two original architectural plans for the bed

Part of the artists private collection, you can view the piece in situ here.

A similar example of smaller proportions, made specifically for domestic cats, is part of the Victoria & Albert's private collection.

The bed was produced by Hitchens as the central focus of an exhibition held at Temple Lodge in 1976, which coincided with the artist’s 50thbirthday.

Notes: Born in the 1920s in London, Ron Hitchins moved to Hackney aged 13 and started a market stall on the infamous Ridley Road, she invented the button down shirt and flared trousers. Known as ‘The Flash’ he was a colourful character in London’s East end. Eventually he started to design small terracotta necklaces with interesting abstract designs that he sold on his stall. From this a developed a career as an artist. He primarily designed wall hangings that were composed of a selection of individually designed terracotta tiles. Apart from terracotta he also worked with fibreglass. His designs were often inspired by foreign design influences, notably Aztec. Although much loved as an artist, Hitchins was first and foremost known as an avid Flamenco dancer. He almost single-handedly introduced London to this form of dancing and until his death in 2019 he remained an active member of the Flamenco Dance scene. Claudine Roux, Andrew Tullis and Lucy Cash directed a short film about his life called ‘Made in Hackney’ which can be viewed here