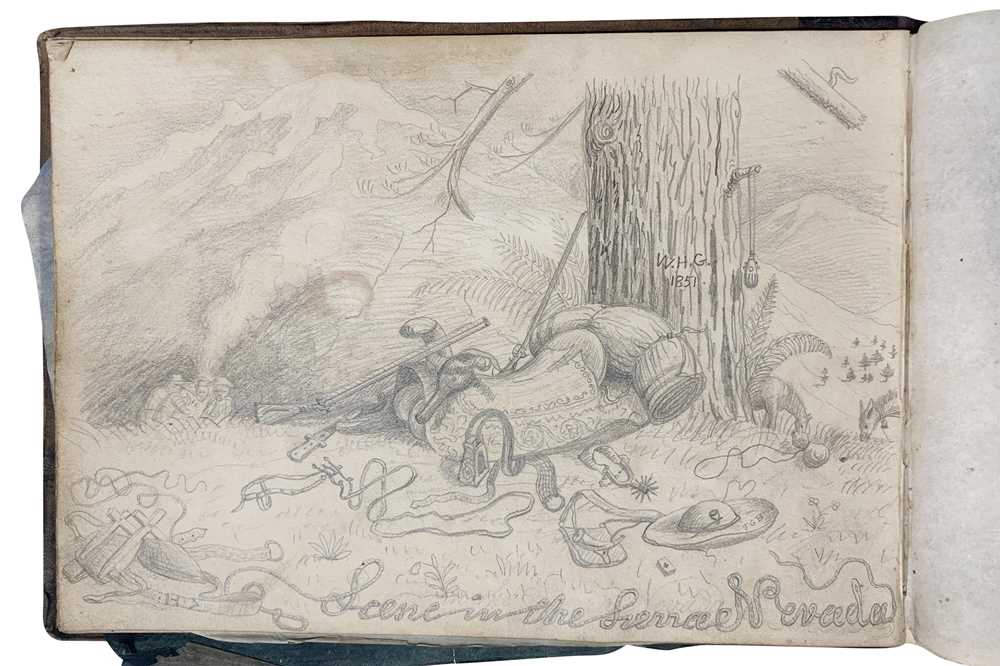 The compositions include: ‘The Gatliff Pine, Trinidad Ca.; Feby. 22nd, 1851’; A sinking sailor; ‘Scene in the Sierra Nevada’ with stylised rope writing; composition dated March 1st, 1851 with Burns poem: ‘Tho I to foreign lands must hie’;

The maritime and coastal scenes include: ‘Portion of coast between Trinidad Bay & Klamath River, Ca.’; American and British navy ships;

The costume studies and South American scenes by Gatliff include: ‘Mariano, An Indian of Bolivia’; ‘Spanish Costumes’; 'Gibraltar, May 1849'

*** The drawings in this sketchbook correspond closely with those held by the Huntington Library, whilst the names (including Gatliff) and places are mentioned throughout Bruff’s journal: ‘Gold rush : the journals, drawings, and other papers of J. Goldsborough Bruff, captain, Washington City and California Mining Association, April 2, 1849-July 20, 1851’ (Columbia University Press, 1949).

‘[FEB.] 13th (Trinidad) Clear and cool. Made the acquaintance of Dr. Gatlin [identified as Gatliff in the index], a graduate of the Royal College of Surgeons, London, and a talented artist. We walked together and made some sketches. I drew the bay, &c.’. p. 479.

Joseph Goldsborough Bruff (1804-1889) is best known as a topographer, journalist, and artist of the gold rush era. He attended West Point from 1820 and organised the Washington City and California Mining Association expedition.

After following the Lassen Trail into California, the expedition disbanded, and Bruff spent a difficult winter in the Sierra Nevada Mountains. He then travelled around California's gold country, making drawings of geographic landmarks, mining camps, and scenes which piqued his interest.

Today, significant collections of Bruff’s work are held by the National Archives, the Library of Congress, the Huntington Library, Yale University Library, and the Smithsonian. Although his works do occasionally come up for auction, we have found no records for such significant material relating to the Gold Rush.