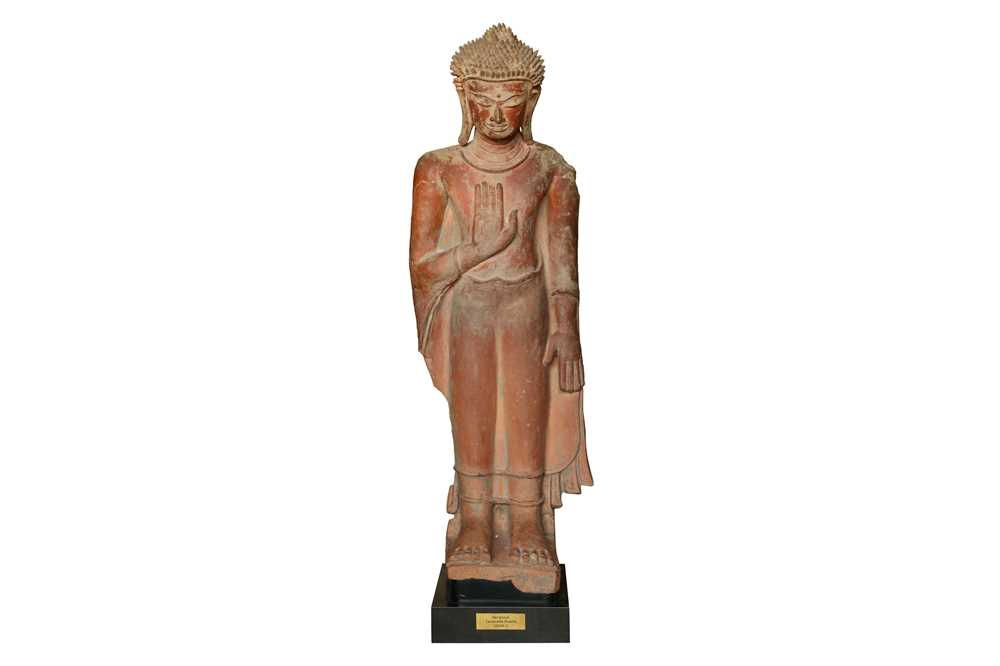 Carved on three sides with a flat back, possibly once attached to a stele or part of an architectural niche, the historical Buddha presented standing in samabhanga (lit. without bending), his right hand lifted in abhaya mudra (the Fear Not gesture) and marked with a spiral, one of the supernatural signs (lakshana) common in Indian iconography to all Great Persons (mahapurusha), whether Universal Emperors (chakravartin) or Buddhas, the left hand resting wide open against his leg, wearing his typical diaphanous monastic attire (uttarasangha and samghati) secured by a belt around the waist, the robe clinging to his slim body, his neck marked with three lines, his face with a serene, timeless expression, showing downcast eyes almost closed with heavy eyelids under pronounced eyebrows marked as a continuous wavy line crossing the forehead horizontally, above them the rounded bindi marking the Buddha's third eye, the elongated earlobes now freed from the heavy princely regalia worn by the Buddha in his young age, the cranial protuberance (ushnisha) and head enhanced with individually crafted terracotta snail shell curls, the overall style and iconography indebted to Indian Gupta sculptures portraying the Buddha in his monastic phase, the back plain, mounted on a black stand with a brass plaque reading Haripunjai Terracotta Buddha, 10th - 11th century, 99cm high including the stand.

Around the 10th century, Mon art (the art produced by the inhabitants of Thailand in the first millennium AD) went into a steady decline in the territories of Central and North-Eastern Thailand under the impact of Khmer influence. Nevertheless, further up north, at a Mon centre called Haripunjaya, (modern Lamphun), Buddhist images continued being produced until 1292 - 1293 in a style that combined Mon, Khmer, and Thai elements in an original solution, making Haripunjaya and its creation the last stronghold and artistic production centre of Mon art (Dorothy H. Fickle, Images of the Buddha in Thailand, 1989, p. 36).

Haripunjaya sculptures like our lot here are usually characterised by square faces; a thick band framing their faces along the hairline, a feature adopted from Khmer art; slightly swelled heads above the temples, with flatter tops and foreheads; joint, horizontal eyebrows; broad noses; and the hair is worked in small, spiky curls. In the Mon period, stone was the primary material for sculptures but at Haripunjaya, terracotta and stucco became the favoured materials, as the Wat Kukut stupa (early 13th century) and its five-storey tower housing stucco Buddha images in the Dvaravati style testify. The slight forward bend evident in the profile of our sculpture suggests that it could have once been part of a similar templar complex, housed within one of the higher niches and looking down to the devotees during their circumambulation of the temple ground.