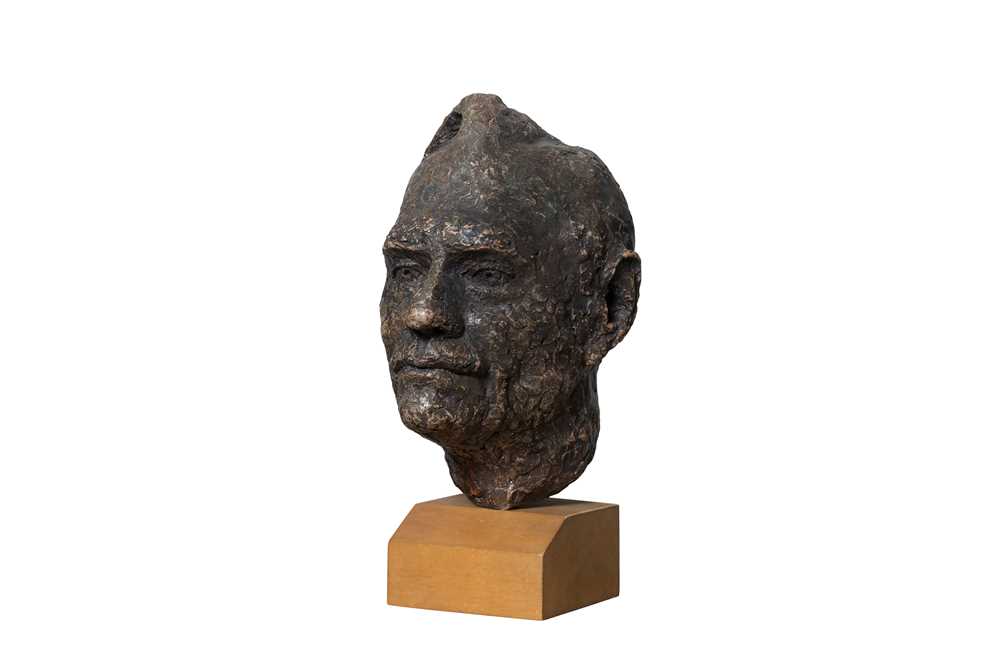 Executed in 1974, when Powell sat for Thornhill in his studio in Putney.

Classical scholar, linguist, writer, soldier, Member of Parliament and orator, Enoch Powell was one of the most controversial British political figures of the last century. Now largely remembered for his highly damaging 'Rivers of Blood' speech in 1968 which opposed immigration, and for which Edward Heath, the Conservative Party Leader, sacked him as Shadow Defence Secretary, in his earlier years Powell's personal views and political outlook were more liberal.

As Junior Housing Minister in the mid-1950s he spoke in support of the Slum Clearances Bill and in particular advocated full compensation to all those whose homes were compulsorily purchased. In 1959 he vilified the government's slack attitudes to the atrocities carried out by British forces at the Hola Camp in Kenya, arguing that 'We cannot, we dare not, in Africa of all places, fall below our highest standards in the acceptance of responsibility', a speech that Dennis Healey described as 'the greatest parliamentary speech I ever heard...' As Health Minister in 1961 Powell began the debate about the country's nelgect of psychiatric institutions, calling for such rambling Victorian behemoths to be abandoned, their services incorporated into main stream health care, and patients treated in hospital wards. It was a speech that led eventually to the Care in the Community initiative of the 1980s.

But as the years passed his views became more entrenched. He published the authorative The House of Lords in the Middle Ages in 1968, and spoke vociferously against reform of the institution, and he campaigned against the UK joining the EEC (now the EU), eventually quitting the Conservative Party in 1974 over the issue, and urging voters in the snap election of February that year to vote Labour. He immediately returned to politics, however, as Ulster Unionist MP for South Down just as the troubles both in Northern Ireland on mainland Britain were escalating, denouncing the government's Prevention of Terrorism Act.

Since the late 1960s and his infamous speech warning of the perils of immigration, Powell's name has invariably been linked to racism, a charge he has always categorically denied. Asked by David Frost in an interview in 1969 if he considered himself a racist Powell replied: 'It depends on how you define the word 'racialist'. If you mean being conscious of the differences between men and nations, and from that, races, then we are all racialists. However, if you mean a man who despises a human being he belongs to another race, or a man who believes that one race is inherently superior to another, then the answer is emphatically 'No''.