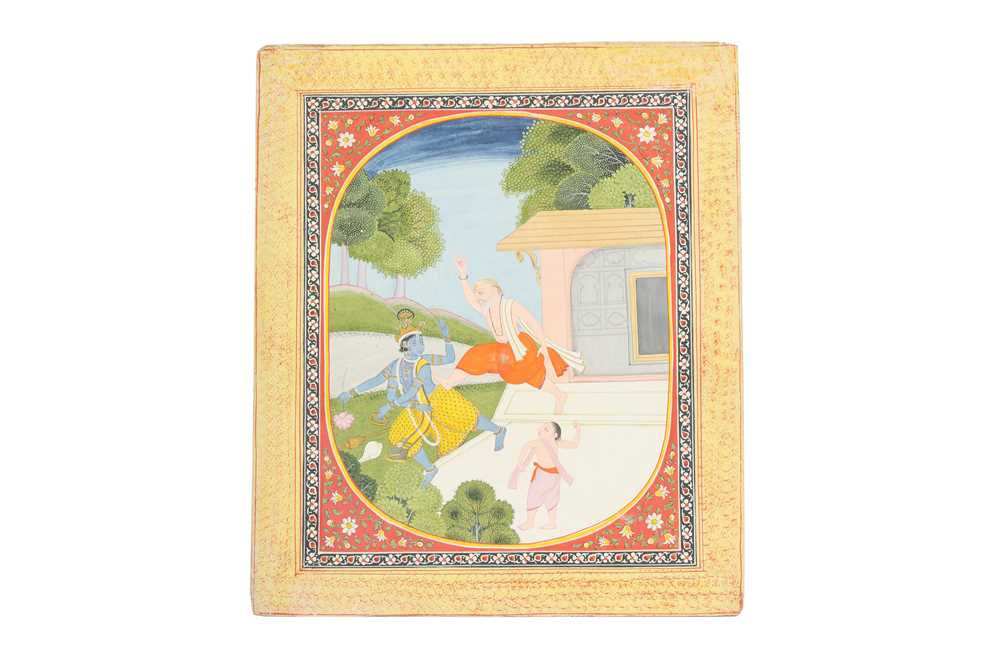 Opaque pigments heightened with gold on paper, the vertical composition depicting the moment the Maharishi Bhrigu, one of the seven great sages (Saptarshis) created by Lord Brahma, in an outburst of anger starts kicking Lord Vishnu on the chest to wake him up, the Hindu God portrayed helpless and at a loss, holding onto some of his attributes (the chakram and the lotus), the latter two on the floor next to him (the conch shell and the club), the sage wearing a long rosary bead necklace, his forehead marked with the Urdhva Pundra, the Vaishnava tilaka (mark), in the foreground a disciple of the sage raising his arm and hand in a form of incitement, the scene set within a typical Kangra-style oval cartouche with red, yellow and white rules, in the corners floral sprays on red ground, a floral border on dark blue ground and red-speckled yellow borders, the recto with black ink inscriptions in Devanagari and Persian scripts and a fly-leaf, 30cm x 26cm.

The choice of this painting's subject is rather unconventional. The Maharishi Bhrigu, one of the great sages of the Hindu tradition, is shown attacking Lord Vishnu and kicking him with his foot. This scene refers to a Hindu legend, known as the Patience Test of the Trimurti, in which many great sages gathered on the bank of the river Sarasvati to establish who out of the trinity of gods, Vishnu, Brahma, and Shiva, was the most important and to whom they should offer the Pradhanta (Master) of the Maha Yagya worship. Bhrigu was appointed as the sage that would test the deities.

After briefly confronting Brahma and Shiva with dissatisfactory results, Bhrigu tries to engage Vishnu, but he is deeply asleep on the Serpent Shesha. In an outburst of anger and frustration, Bhrigu kicks the God on the chest to wake him up. Upon his awakening, Vishnu greets the sage and start massaging his feet, concerned he had hurt his feet in kicking the God's chest. Bhrigu, ashamed of his ego and in total awe of the God's mercy and patience, elects Vishnu as the greatest deity of the Trimurti.

Some elements worth noticing here are the presence of the Vaishnava tilaka on the forehead of the sage, already hinting at his devotion for Vishnu and his final decision, and the facial expression of Vishnu. There's no anger, surprise or disappointment in his face; instead, he may look a bit surprised and defenseless. At a first glance, the beholder may even think that Vishnu must have done something wrong to anger the sage and thus, sympathise with Bhrigu: the subtle double entendre of this painting is what makes it unusual. Although there is no sign of the Serpent Shesha, the presence of the river Sarasvati to the left creates an immediate link with the legend of the Trimurti Patience Test, reminding the beholders not to haste their judgment and to think twice before taking Bhrigu's side.