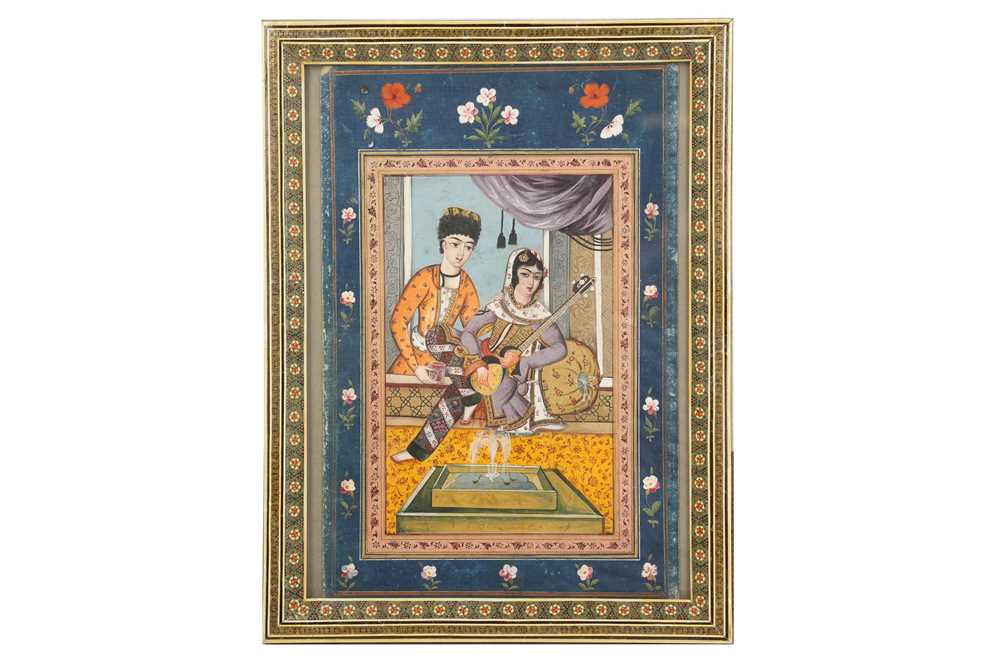 Opaque pigments, pencil and ink heightened in gold on paper, the vertical composition depicting an interior scene with a young lady seated on a fence against a large oval bolster playing the tar (an Iranian long-necked, waisted lute family instrument), a young beardless member of the court gently tapping her on the shoulder offering her a glass of wine, the scene full of innuendo and complicity, the attire and jewels of the lady suggesting a high-class, noble lineage, the composition set within concentric floral borders on pink and dark blue grounds, a faded signature and date in gold ink on the side of the fountain reading Ya Sadiq Al-Wa'd 1197 AH, mounted, glazed and set in a khatamkari micro-mosaic frame with stellar and geometric motifs, the folio 28.2cm x 19.2cm, 33cm x 25cm including the frame.

Muhammad Sadiq worked in a variety of media and he was one of the greatest Zand painters of lacquer, oil paintings and watercolours. He was particularly skilled in depicting figures, flowers, battles and hunting scenes. His figures often tend to have modeled and elongated features, and they are always characterised by different attributes, accessories, facial expressions, and physiognomies. Their attires offer a wonderful insight into the fashion of late 18th-century Shiraz: the men often wear wound colourful turbans, whilst the women showcase jazzy wide trousers and loose blouses, their hands often painted red with henna and featuring black tattoos.

Muhammad Sadiq embraced and mastered the artistic transition from the cosmopolitan and imperial themes of the late Safavid and Afshar periods to the increased sense of lyricism, emotional expressiveness, and introduction of more poetic and intimate subjects, quintessential features of Zand painting (Layla Diba, Royal Persian Paintings: The Qajar Epoch 1785 - 1925, 1998, p. 147).

Among his most celebrated and renowned works one could count the St. Petersburg album; two oil paintings in the pavilion built by the Zand ruler Karim Khan in Shiraz; and murals in the Chehel Sotun Palace in Isfahan. For further information on this artist and his output, please see Khalili, Robinson and Stanley, Lacquer of the Islamic Lands, Vol. I, 1996, pp. 74-5, cats. 66-68, 96-97, and M. A. Karimzadeh Tabrizi, The Lives & Art of Old Painters of Iran, Vol. I, London, 1985, pp. 257-64.