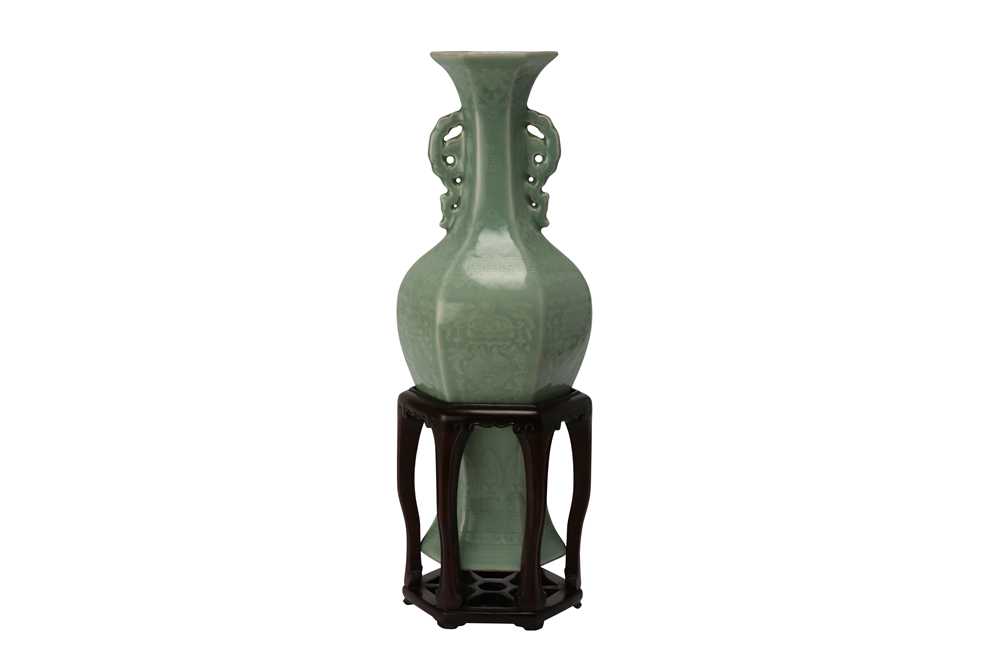 The tall slender baluster vase of hexagonal section, finely incised on each side to depict a ribboned double fish pendant suspended from a canopy among clouds, all above a band of archaistic cicada blades, above further decorative bands containing key-fret, dots and kui dragons, the tall waisted neck with a shou character between archaistic foliate dragon motifs above and below, flanked by two pierced dragon handles, and between further formal borders, raised on a wood stand, 34.5cm H. (2)

Vases of this attenuated form became popular during the late Ming Dynasty and their popularity was retained through the early Qing Dynasty. Gao Lian noted that ‘if a vase is tall and slender it is appropriate for a mixture of tall and short flowers, crooked flowers are better in shorter vases’.

The form and decoration of the present vase combining two of the eight Buddhist emblems – the double fish and canopy is extremely rare with a vase of similar size and in blue and white having been sold in Sotheby’s London, 8 June 1993, lot 69.

In another related group of vases the central element on each side is replaced with a dragon. One such vase in the collection of the Palace Museum, Beijing, measuring 57.4cm high is illustrated in The Complete Collection of Treasures of the Palace Museum, Blue and White Porcelain with Underglazed Red (III), the Commercial Press, Hong Kong, 2000, fig. 126, where the authors note that the vase was made under the supervision of Tang Yin who provided a sketch of this innovative form. It is recorded that the emperor Qianlong was very pleased with both the colour and the painting style of the vase; it is also recorded that the vase was made in celebration of an Imperial birthday.

A yellow-ground version in the Nanjing museum is thought to have been produced for the occasion of the Emperor’s sixtieth birthday and is reproduced in Imperial Kiln Porcelain of Qing Dynasty: Gems of Collection in Nanjing Museum, Shanghai, 1997, no. 29.

The presence of a wooden stand on the present piece is likely for the purpose of stabilising it due to its high centre of gravity. An attenuated vase, apparently with pale celadon glaze, complete with a similar wood stand may be seen on the Qianlong textile accession number Gusi 00202 in the collection of the National Palace Museum and is reproduced in Floral Art for Pleasure: Appreciation of Flower Vessels and Lifestyle, Taipei, National Palace Museum, 2019, II-26.