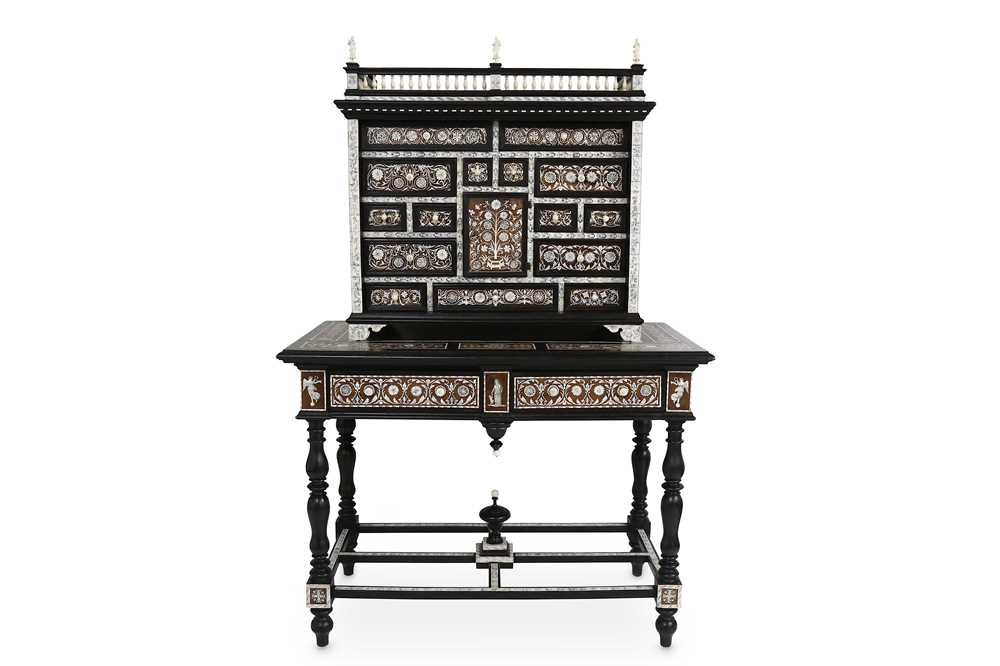 WITHDRAWN !!! A FINE LATE 19TH CENTURY ITALIAN EBONISED AND IVORY INLAID CABINET ON STAND IN THE MANNER OF FERNANDO POGLIANI (ITALIAN, 1832-1899) profusely inlaid with ivory throughout, the upper section with an ivory balustrade surmounted by three Ivory figures of musical muses one playing flute, one with a triangle and one with pipes, over an arrangement of various drawers all with ivory bun handles, the drawers inlaid with scrolling acanthus leaves and stylised flower heads and centred by a panelled cupboard door inlaid with a stylised plant with scrolling tendrils, opening to reveal three further matching drawers, raised on a stand with conforming decoration, fitted with two frieze drawers centred by an engraved ivory panel of Venus and Cupid, the corners also inlaid with ivory depictions of classical goddesses including Venus and Cupid and Justice, raised on a ringed and knopped baluster legs united by a geometric stretcher centred by an urn with ivory ball finial,  184cm high x 125cm wide x 66cm deep This lot is subject to CITES AUCTION COMPARABLE: See Sotheby's, New York, 20 April 2007, lot 35 for a cabinet on stand of similar design, inlaid throughout with ivory foliage and surmounted by an ivory balustrade with ivory finials over.  MUSEUM COMPARABLE: Comparable cabinets by Pogliani are in the Museo del Castello Sforzesco in Milan. This exceptional cabinet on stand clearly shows the influence of Pogliani's work, embracing the Renaissance and classical styles of Italy's past and yet also demonstrating the influence of the Middle East, with stylised inlay and arabesques more often found in Islamic furniture. Ferdinando Pogliani had a workshop in Borgo di Porta, Vittoria N.81, Milan and a gallery at Via Monte Napoleone. He was renowned for his use of ivory inlay in his Renaissance inspired pieces of furniture, he won numerous prizes at exhibitions for this work which was famous across Europe.