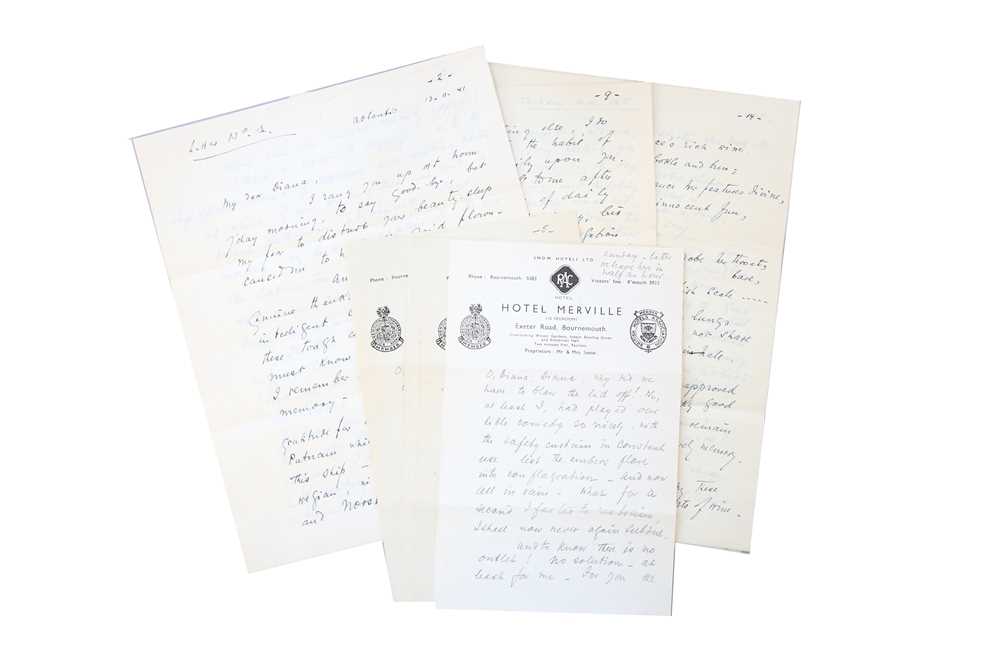 A collection of love letters written to Diana Love Kilby, from John de la Vallette, possible Director of Middle Eastern Propaganda for the Ministry of Information, one reads in part “O, Diana, Diana, why did we have to blow the lid off! We, at least I, had played our little comedy so nicely, with the safety curtain in constant use, lest the embers flare into conflagration - and now all in vain - What for a second I failed to restrain , I shall never again subdue… O Diana my darling, now that I have had one glimpse of what might, though it must not be, send me not all at once into the utter darkness of quite impersonal contacts - sprinkle here and there through your letters a sentence, a word, a thought that reflects our last unuttered moments together…”, pencil on Hotel Merville stationary,12pp, 8vo, mailing folds, Bournemouth, 21 September, 1942; Another reads “Here I am, Diana dearest, safely on the other side at last.... I found myself in New-Foundland. A most mangey retriever met me on the quayside and spoiled my illusions about the much praised local build - the little place of Botwood, some way up a long-drawn waterway that cuts half across the island was exactly as Hollywood would have depicted it: a timber build wooden church with a pleasant roof of bright green and yellow slats, and two tiresome red steeples crowned a cluster of wooden bungalows with raised floors and narrow “porches” - or verandas as we say out East” “Our fool of an attache has not yet connected Jim Warburg about my passage to Australia. “We don’t like to do any lobbying!” is the idea. As if it was not JW O’ own wish that I contact his people first. It is a nuisance that in times of war one has to bother about Embassies.”...”meanwhile I have been thinking a lot about you - it is a bad habit I find it hard to relinquish, and of what I wrote you from Bournemouth… and I am still sure that all I said there was true. Should it have been said? Maybe not.”, ink on The Southern Hotel stationary, 4pp, 4to, mailing folds, Baltimore, US, 1942; and 8 others all with original mailing envelopes (10)