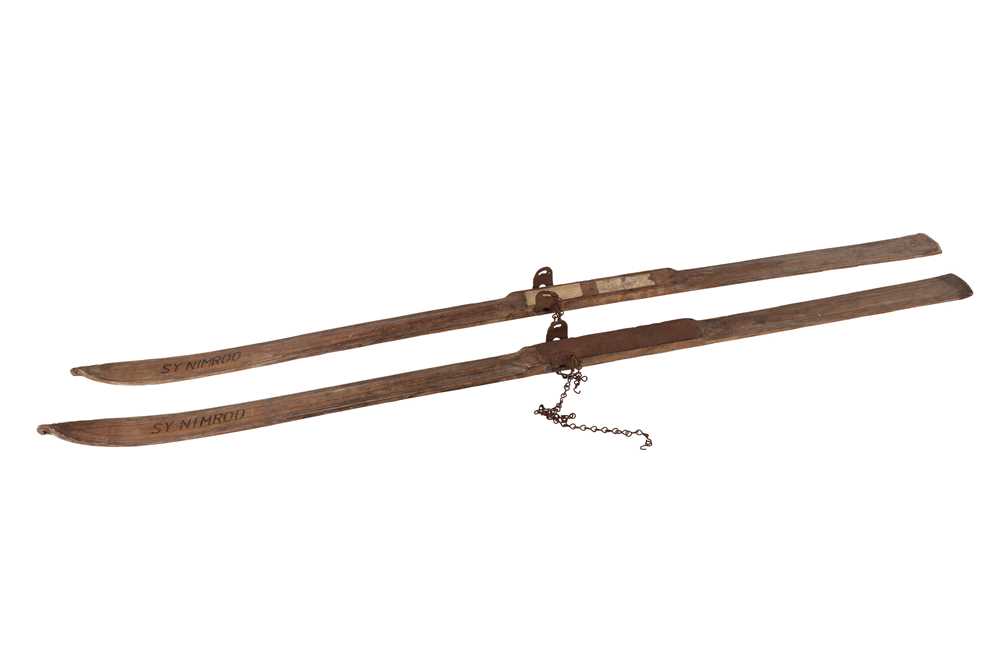 A pair of varnished wooden skis, each ski featuring pointed and up-curved tip with a tip extension reminiscent of the prow of a Viking ship, and a square tail, the upper surface of each ski decorated with simple incised pattern, the underside of the ski near the tip shows what looks like a manufacturer's stamp, now partly illegible, and carved letters "PEZIAL", one ski bearing two cards affixed to the upper side, one with embossed 'Admiralty House, Portsmouth' heading and with handwritten names of all the participants to the Nimrod expedition, the other with typed note reading in part "Pair of skis from S.Y. Nimrod, the ship used by (?) Shackleton on his voyage to Antarctica", both cards affected by severe age-wear and soiling throughout, 1890 x 90 x 95mm; with two poles of the same period. (4)

An almost identical pair of skis related to Scott's expedition in 1901-1904 is part of the collection of the Canterbury Museum, Christchurch (New Zealand) and is visible at the following webpage https://collection.canterburymuseum.com/objects/252149/pair-of-skis.

Ernest Shackleton organised and led the Nimrod Expedition as an attempt to reach the South Pole and also to continue the scientific and geological survey work of earlier expeditions. Even if the main target was not reached, the expedition achieved the first ascent of Mount Erebus, Antarctica's second highest volcano. The Southern party led by Shackleton himself reached a latitude of 88° 23', just 97 miles from the Pole. They had come closer to the Pole than anyone else in the world at that time.