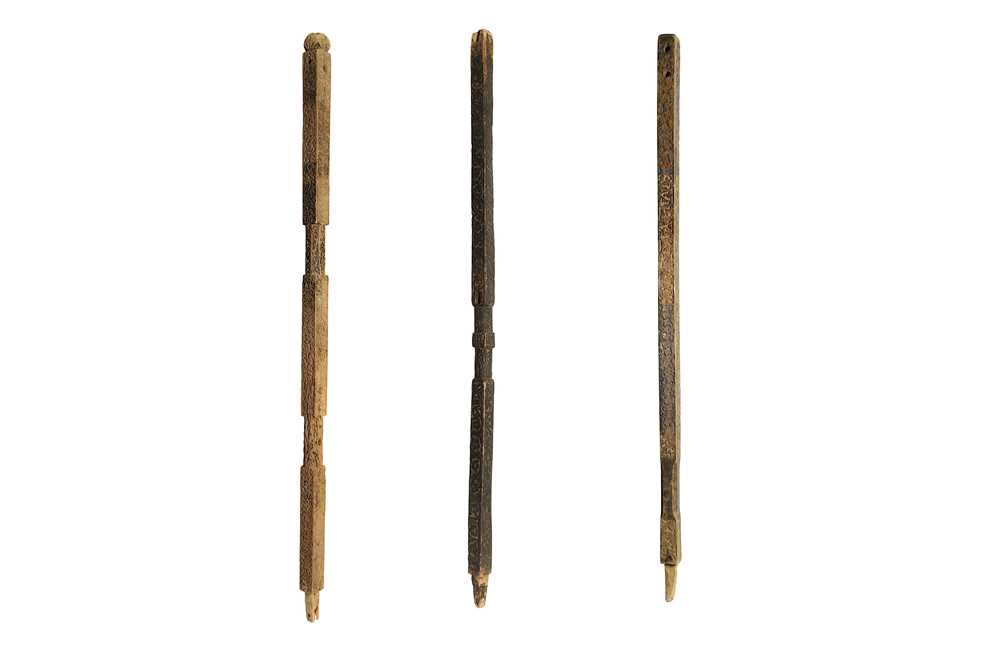 THREE CARVED, POLYCHROME-PAINTED AND LACQUERED WOODEN POSTS, Possibly Dagestan, Caucasus or Central Asia, late 19th - 20th century, comprising three decorative wooden posts, each of rectangular shape and carved in relief on each side, two still presenting residues of paint in polychromes and one of lacquer, the decorative vocabulary of each post consistent in style and manner and mainly consisting in interlocking vegetal and floral sprays with rosettes and split palmette leaves, two featuring calligraphic cartouches with Ya Allah and the name of the Prophet Muhammad, and further auspicious blessings, one staff with figural decoration featuring a rider on a horse and a bird on the rounded pommel, the longest 139cm long.

Similar wooden posts have appeared in the auction market before and have been attributed to Timurid Central Asia with a much earlier dating (please see Bonhams London, 24 April 2002, lot 313; 17 October 2002, lot 331A; and 24 April 2021, lot 83). The degree of conservation of the wood and pigment, the style of the design, and the content of the calligraphy point towards a later attribution.

In the publication L'Art Décoratif du Daguestan (Moscow, 1971), Tchirkov discusses the finds of the so-called "Albanian" stones, carved stone bases with vegetal and figural decorations produced between the 15th - 19th centuries in Kubachi and other areas of Dagestan. Their ornamental distaffs are often missing, suggesting they would have most probably been made of wood and have deteriorated with time. Earlier designs can be identified by expressly primitive and yet vibrant figural decorations, whilst later examples seem to favour more standardised compositions with foliage, vegetal trellis and flower heads. It seems reasonable to suggest that the posts in our sale would belong to this type of production, casting light on the rich artistic heritage of the Islamic Caucasus, an area still quite under-studied and under-valued.