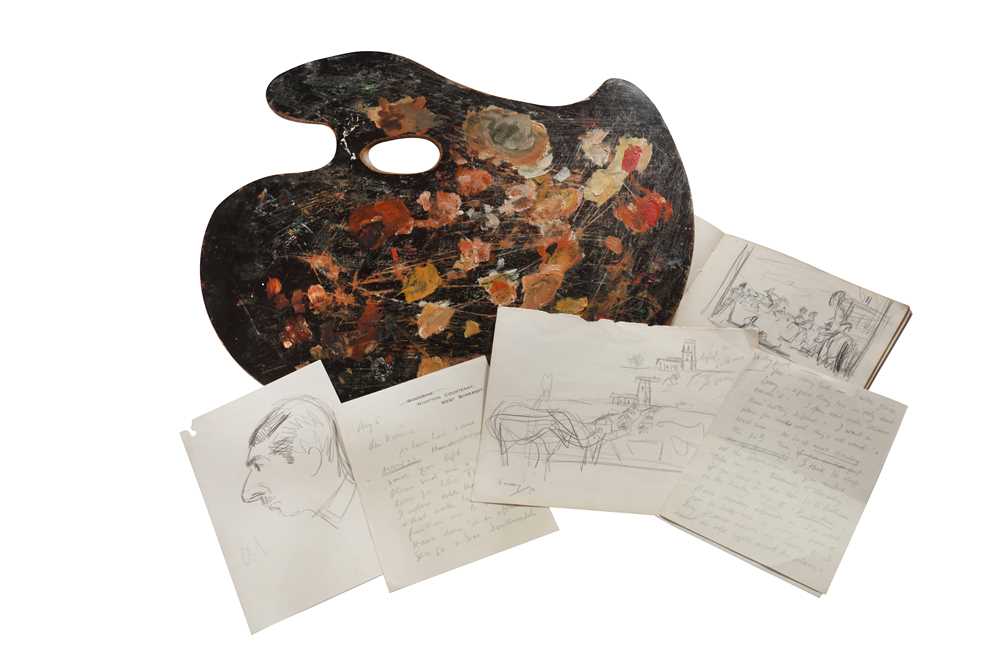 An exceptionally large collection of letters, sketches, ephemera, and photographs related to Alfred Munnings. Highlights to include: a sketchbook to with preparatory pencil sketches for the paintings ‘Gypsy Life’, ‘Epsom Downs’, ‘City and Suburban Day’, ‘The Departure of the Hop-Pickers’ and ‘Gypsies on Epsom Downs – Derby Week’; photographs of Alfred and Violet, sometimes with their dogs; a rare 78rpm gramophone record of Munnings reciting verses of ‘The Tale of Anthony Bell’; a pencil sketch of a man astride a horse signed “A.J. Munnings, RA, after E. Lutyens”; album page featuring a pencil view of Kersey Church, Suffolk, on one side and the sketch of a seated figure on the other; a pencil portrait of Maurice Codner signed ‘AJ’; 55 autograph letters signed (usually as ‘AJ’) to his friend and fellow artist Maurice Codner, mostly undated, covering various subjects (“What a country, no end to it. Such lanes, such tracks, such giant beech trees, and woods and rivers and miles of moor, miles, and miles…I am reading a book I bought in Charing Cross Road,’ Conversations of James Northcote with James ward RA, edited by Ernest Fletcher. The best artist’s book I have ever read. Northcote worked under Reynolds and knew all the painters…Go get it!”; “I note you’re busy, a good thing too, only don’t overdo it. I often don’t work as there is nothing to paint…I do want you to help me to arrange some of my frames inside the house”; “What bothers me is no studio to work in in the cold weather – at Dedham, I have one – and again at Dedham – Lord knows what’ll happen in the Spring… I see no future ahead whatever is left is alone, it is now packed with evacuees”; “I would like to spend all day writing letters and waiting for replies for that seems as well as trying to paint from NATURE”; “A pity you can’t come – I’ve been working each day on that old farm – left-hand side before you get to Houghton Hall on the way to Stoke…But what days – I’m only making studies each day makes me sad because in that one small area there is endless stuff to do”, “I am supposed to be painting for the Air Ministry. Came here a fortnight ago and started on these ponies and am still at it. Most interesting”, 118 pages in total, v.s., various locations including Castle House, Dedham, King’s Withypool, Minehead, Hotel Ritz, Paris, c. 1938-1946); 20 letters from Violet Munnings to Codner (one reading “How kind of you to send us the telegram of congratulations on our silver wedding, we very much appreciated it, fancy 25 years without a hitch! Speaks well for dear old Alfred doesn’t it?”, 17 March 1945; another letter says “What awful luck, these boys ‘flowers of the English nation’ taken from their jobs to fight in a war worse than the first war that we were told would be the last war and wasn’t!”, she goes on to say that Munnings has been injured in a riding accident, “he has just been bucked off Anarchist and is strapped up with two cracked ribs!! And a hurt foot!!!!”, 5 March); programs for gallery exhibitions of Munning’s work, cards with different scenes sent to Maurice by Munnings; other items signed by Munnings; collection of newspaper clippings relating to Munnings; some printed works by Munnings: The Tale of Anthony Bell.A Hunting Ballad, Old Brandy and Cherry Bounce. A Ballad of Exmoor and Larkbarrow Farm: A Ballad of Exmoor, occasionally annotated by Munnings, all in original wrappers, 4to, privately printed; A wooden palette with the artist's signature affixed to the reverse, donated to Munning's housekeeper and briefly exhibited at the Munnings Museum in Dedham, v.s. (qty)