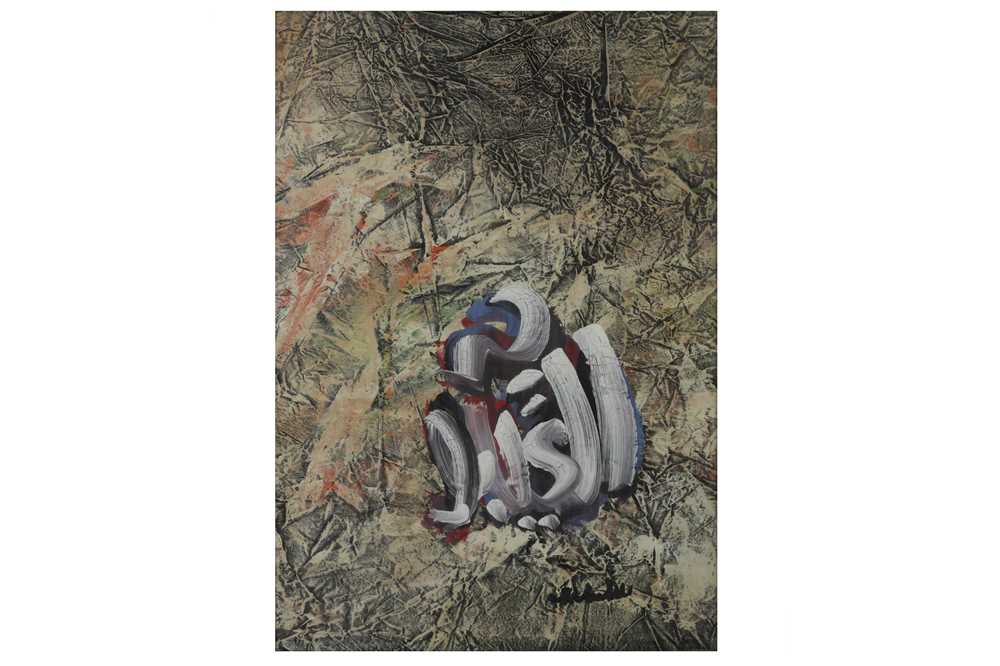 Dr. Mohamed Said Farsi (1934-2019) was one of the world’s great patrons of Egyptian art. In 1956 he was one of only 35 students from the Kingdom of Saudi Arabia sent abroad for further education. Having obtained a BA in Architecture and Town Planning from the University of Alexandria in Egypt, he returned to Saudi Arabia and in 1972 became the Mayor of Jeddah. During his lifetime, he assembled the most important private collection of Modern Egyptian art.

His collection became the first of its type to be fully documented with the publication of ‘A Museum in a Book: The Farsi Art Collection – the “Egyptian Works” owned by Dr. Mohammed Said Farsi’ by the critic and scholar Dr. Sobhy Sharouny (published 1998).

Abdalla is a key figure in Egyptian modernism and is renowned for having invented a kind of Arabic hieroglyphics suggesting human figures with Arabic words - see also, Lot 12. Painted circa 1977-1982, the present work is from the series al ghaybouba, (The Coma), suggesting a prostrate character in a field of destruction and desolation.

The artist started this series after the Arab defeat in the Arab-Israeli war of June '67. Called al naksa in Arabic, it was a difficult moment for the Arab world, following the hope which had begun with the nationalization of the Suez Canal by President Gamal Abdel Nasser in 1956, and the subsequent popularity of the Pan-Arab movement.

Abdalla moved from Egypt to Denmark in 1957 and later lived in France. From 1967 onwards, Abdalla regularly painted the theme of al ghaybouba. In 1980 he had planned return to Egypt, staying there for long periods but he was deeply disenchanted about Egypt's future, claiming that President Anwar Sadat had sold the country to the Americans. This sentiment culminated in his large fresco (14 metres in length) that is a modern day version of Napoleon's famed Description de l'Egypte.

In the present work, Abdalla first executed the background in acrylic on crinkled paper, that he flattened afterwards with an iron. Then he painted a first black print of his form (here the word al ghaybouba), then he added large brushy colours, while in full movement of his entire body, in very few paint brushes. While he was painting, he used to think he was dancing. Lastly, he would finish the work by drying it with a hair dryer (giving the little crackings seen on the white brush strokes).

We are indebted to the family of the artist in assisting with the cataloguing of this lot.