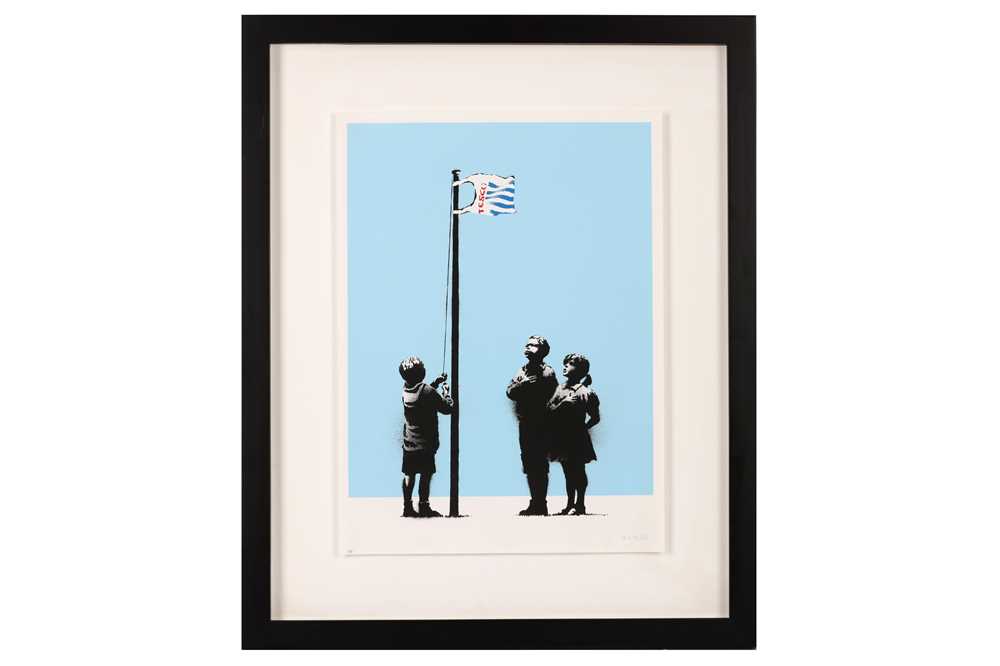 Very Little Helps, also known as Tesco Flag or Tesco Kids is based on a mural painted on side of a pharmacy in Essex Road, North London. This mural became the subject of public, media speculation; sadly it was subsequently vandalised provoking further discussion on distinctions between street art and graffiti. After it was partly damaged, with the Tesco flag painted over, replaced with a tag from rival artist King Robbo, the work was placed under perspex.

In 2008 Banksy created Very Little Helps as series of 299 signed prints. These were released as a lottery at Pictures on Walls that year which raised £24,406.61. The proceeds were donated to Sightsavers, the sight & disability rights charity.

A cutting reference to Tesco’s famous slogan Every Little Helps, the work seems to denounce the overwhelming presence of supermarket chains in place of independent stores. Tesco is one of the top 5 largest retailers in the world. Large market retailers pose a significant risk to smaller businesses and monopolise the British retail landscape. The result of expansion by corporations such as Tesco leaves the public with fewer options to chose from, chipping away at our consumer freedoms.

Banksy uses children to depict the vulnerable. Their faces suggest that they have been brainwashed, their faces are upturned to Tesco brand as if seeking guidance.

The depiction of a grocery bag as a flag also seems to suggest that Banksy believes that corporations have been allowed to grow into such big entities under capitalism that they can almost be considered the new nation-states.

In his critique of Tesco, Banksy draws on a similar motif to his works with the Tesco Value soup can, which seem to highlight poverty present in our society. Indeed, food bank use is increasing steadily year after year under government austerity measures.