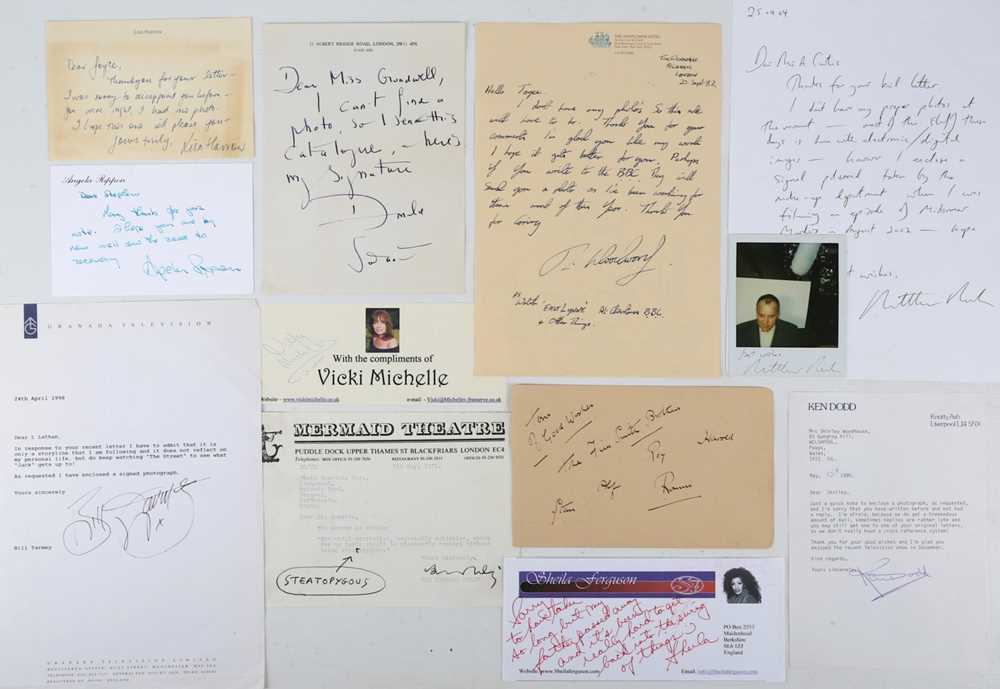 A collection of autographs by actors and entertainers, including: Nicholas Parsons, Mike Yarwood, Derek Thompson, Bill Tarmey (typed letter from Bill Termey, reads in part "In response to your recent letter I have to admit that it is only a storyline that I am following and it does not reflect on my personal life, but do keep watching “The Street” to see what “Jack” gets up to!"), Jack Warner, Fiona Bruce, Lesley Kay, Ian Richardson, Graham Bickley, Sheila Hancock, Eric Sykes, Eamonn Andrews, Isabel Lucas, Bruce Forsyth, Ellen Terry (signed church donation envelope), Sheila Ferguson, Barbara Windsor (typed card reading in part 'Scott and I would like to thank you for your good wishes on our recent marriage. As you can imagine we are very happy and very touched by your kind words), Fiona Fullerton, Ken Dodd (letter signed reading '…I’m sorry that you have written before and not had a reply. I’m afraid, because we do get a tremendous amount of mail, sometimes replies are rather late and you may still get one to one of your original letters, as we don’t really have a cross reference system!'), also including a typed letter to Ingrid Bergman from a fan asking "What do you first notice about a man?", signed by the actress at close with her initials and her reply "His height!", v.s., early 20th century-1990s (quantity)