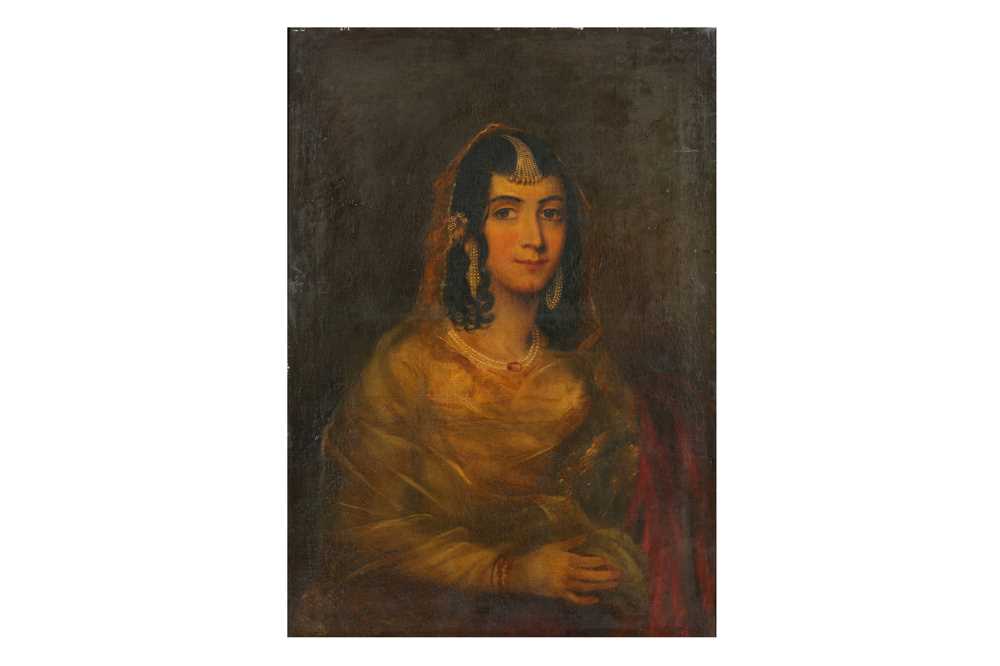 PROPERTY FROM A PRIVATE SWEDISH COLLECTION

Oil on canvas, portraying a young lady of title, possibly Indian or of European origin dressed in the local fashion, wearing a diaphanous shawl across her shoulders and on her head, her jewellery a mixture between Indian and Western models including a two-strand pearl necklace with a large spinel in the centre, long pearl earrings, and the traditional maang tikka (Indian forehead ornament for married women) with eight strands of pearls, mounted and framed, 103cm x 77.8cm including the frame.

Provenance: Purchased at auction, previously in a private Swedish collection. The previous owner inherited this painting from Bror Persfelt (1881 - 1975), the first cellist and concertmaster of the Royal Court Chapel in Stockholm (1922 - 1941), and his wife, a ballerina in the corps de ballet of the Royal Opera, Stockholm.

The style and overall composition of this painting point to its likely execution in India during the early 19th century. The work can be closely compared on stylistic and compositional grounds to treatments of similar subjects by the Irish painter Thomas Hickey (1741 - 1824). Although the precise identity of the author has yet to be satisfactorily resolved due to the lack of a signature, a plausible attribution to the Circle of Hickey is proposed, showing a comparable treatment of the characterisation of the figure in a renowned painting by the artist, An Indian Lady (Indian bibi Jemdanee), 1787, currently in the collection of the National Gallery of Ireland in Dublin.

Hickey travelled widely between the late 1770s and the early 1800s, mostly working in India, Portugal, Italy and England. In his recurrent travels to India, he focused primarily on portraits and genre scenes, which soon earned him a reputation for bright, well-balanced and culturally engaging paintings.

He found himself in South India just in time for the start of the Fourth Mysore War (1798 - 1799), which kept him engaged in painting. In Mysore, he was commissioned to make a number of sketches depicting family members of Tipu Sultan, the then Maharaja of Mysore. Between 1799 and 1801, he was based in Srirangapatna and Vellore, and almost solely worked on the portrait sketches of Tipu's sons, uncle and suborders. He then retired to Madras, where he lived until his death in 1824.