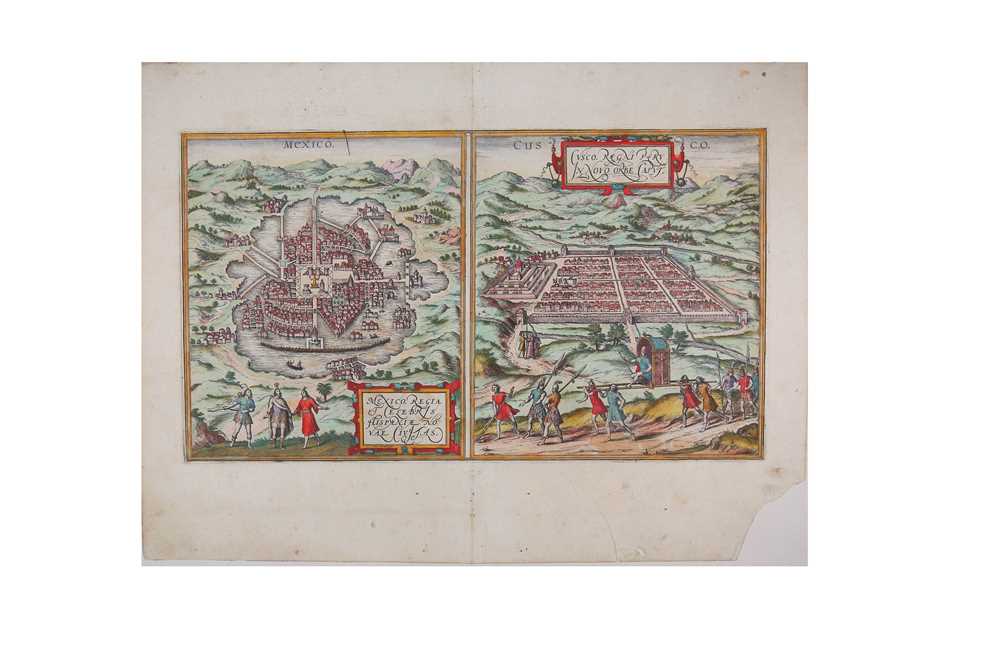 A collection of 30 copper engraved maps from ‘Civitatus Orbis Terrarum’ , including Nullus in Orbe Locus Baiis Praelucet Amoenis, after Ortelius and Hoefnagle, panoramic view of the Bay of Pozzuoli, adorned with a garland of flowers and fruit. Dedication by Hoefnagle to his friend Ortelius; Mexico Regia Et Celebris Hispaniae Novae Civitas, with the companion map of Cusco, one of the earliest views of an American City and the only two American views in ‘Civitatus Orbis Terrarum’; Mediolanum, one of the earliest obtainable views of Milan; Grodna, the view of the town shows Russian, Tartar and Wallachian envoys crossing the wooden bridge and entering the city in which King Sigismund II held and Imperial Diet in 1562; Vilna Lituaniae, view illustrating its strategic location on the Wilde River, showing the Ancient Castle and Imperial Palace, taken from a drawing by Guillebert de Lannoy, who visited the city in 1414. Much of the city had been rebuilt in stone and brick by the time this view was first published in 1581; Buxella; Ancona civitas Pisceni celeberrima…; Damascus; central vertical fold, hand coloured, laid on card, occasional staining and offsetting, c.1581 (30)

***Civitatus Orbis Terrarum is the most influential book of town plans in the 16th century.