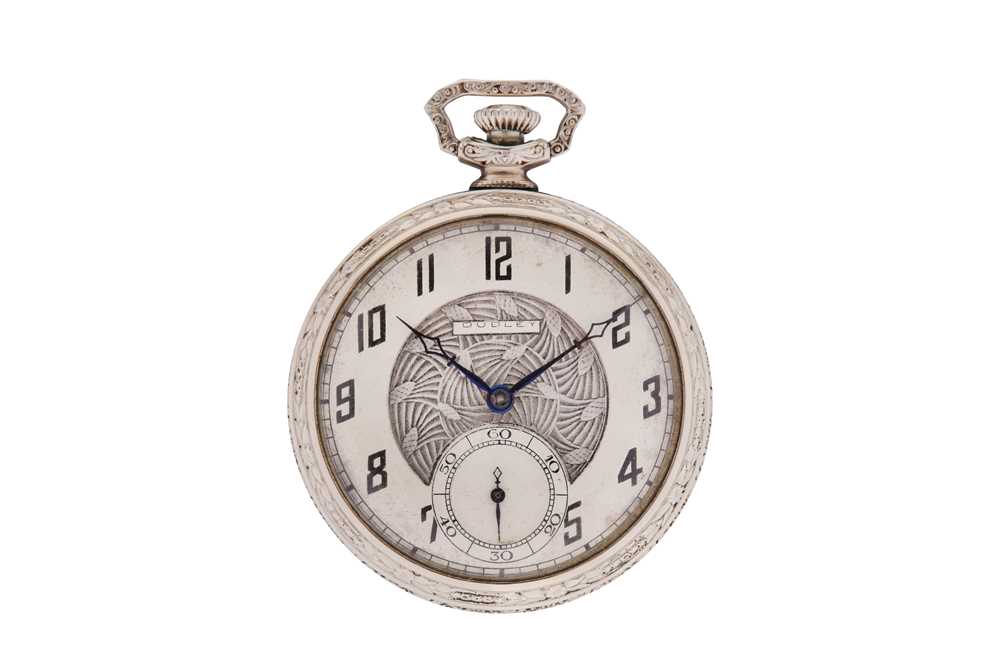 The back of this pocket watch showcases a skeleton movement with different masonic symbols, such as:
- the Eye of Providence, representative of God's Divine Grace and Justice, approving of anyone who follows moral laws;
- the Letter G, representative of God, the Ultimate Architect of the Universe;
- the Square and Compass, representative of spiritual eternity and of the infinite boundaries between the compass and the earth. The compass also stands for balance, fairness and stability;
- the Holy Bible, on top of the bridge with the open winding pinion, indicating that the watch is a Series 1, the rarest and most sought-after Dudley watch for collectors with less than 1400 movements.

*William Wallace Dudley was a Canadian citizen born in 1851. His passion for watches led him to start his career as a watchmaker apprentice at the young age of 13, making ship chronometers. After finishing his apprenticeship, he moved to the United States where he joined the Waltham Watch Company. In his career, he worked for several watch companies, such as the Illinois Watch Company and the South Bend Watch Company. His last employment before he started the Dudley Watches was as designer and manufacturing superintendent at the Hamilton Watch Company in Lancaster, Pennsylvania.

Dudley was deeply fascinated by the Freemason and reputedly, he was a member of the York and Scottish Rites; of the Nobles of the Mystic Shrine; and of the Tall Cedars of Lebanon. Upon leaving the Hamilton Watch, he followed his dreams and started his own watch company, The Dudley Masonic Watch, established in 1918 and primarily focusing on plates machined by his friend Willies R. Michael - also a Freemason, characterised by masonic symbols (i.e. a slipper, plum, trowel, level, square, compass, the letter G, and the bible). Designing and producing masonic-themed watches for over 15 years at the end, Dudley achieved his dream.

His Series 1 was produced in 1922 and it was 15 size, 19-Jewels and 14K yellow gold. He used parts from the Waltham models '1894' and '1897'; instead, the plates and winding mechanisms were produced at the Dudley factory itself.

Unfortunately, with the appearance on the market of wristwatches, the sales started to decline in late 1924. The company became heavily indebted and received a petition for bankruptcy on 28 February 1925 from the U.S District Court in Philadelphia. After having invested all his capital in the company of his dreams, at the age of 74, Dudley found himself unemployed and he was forced to return to Hamilton as a mechanic. He retired at the age of 80 in 1931 and passed away shortly after on 8 of February 19. Sadly, he did not live long enough to witness his work becoming famous and sought-after among different collectors.