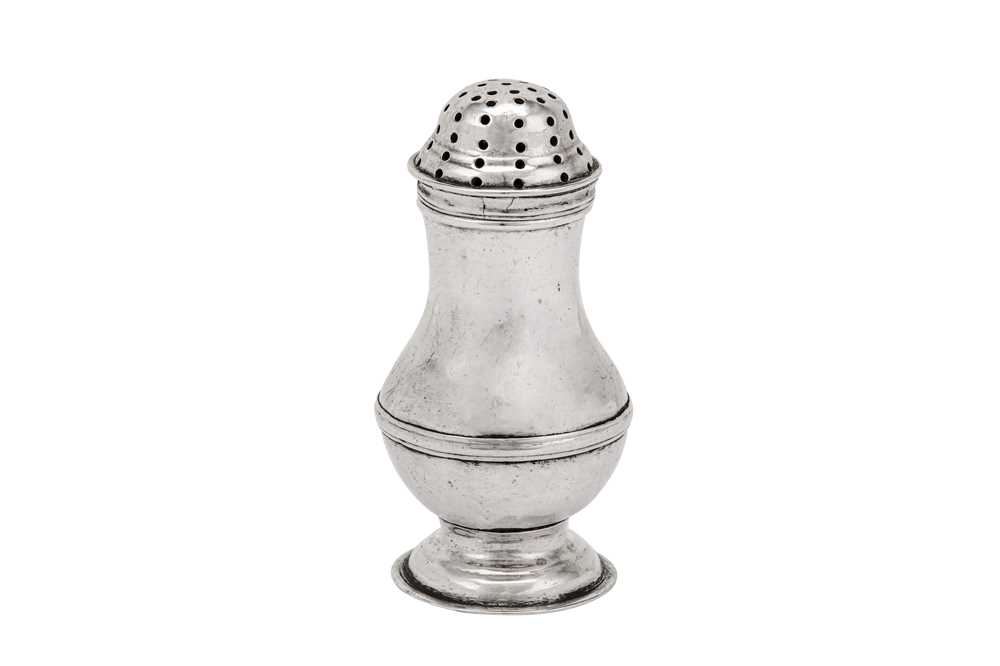 Of baluster form with a central girdle, upon a domed spreading circular foot. The domed pull off ‘bun top’ lid with drill pierced holes. Marked underneath with maker mark PS in a shield, also with scratch weight 3 oz : 3 : 3.

Apprenticed from about 1716 to 1725 to his father Philip Syng Snr (1676-1739) in Philadelphia, he was born on the 29th September of 1703 in Cork Ireland, he married Elizabeth Warner on 5th February 1730 in Philadelphia and died in the 8th May 1789 also in Philadelphia. In 1748 he advertised in the Pennsylvania Gazette (Philadelphia PA), "Engraving on Gold, Silver or Pewter done by Lawrence Herbert from London at Philip Syng's Goldsmith in Front-street”. Ian Quimby, American Silver at Winterthur, (1995) p. 450. Philip Syng jnr's mark is found upon the Declartion of Independce inkstand.

The present lot’s makers mark PS in a shield shape cartouche, one of the many variations ascribed to Syng, is found upon a spout cup twice near the rim, whereas the lid has PS in a rectangle, Syng’s more commonly ascribed mark, sold Sotheby’s New York, 24 Jan 2015, Lot 641 ($20,000 incl. premium)

Another pepper pot by Syng, of comparable form but with the lid surmounted by a finial, is illustrated Stephen Guernsey Cook Ensko, American Silversmiths and Their Marks IV, (1988), Boston: David R. Godine. p.465.