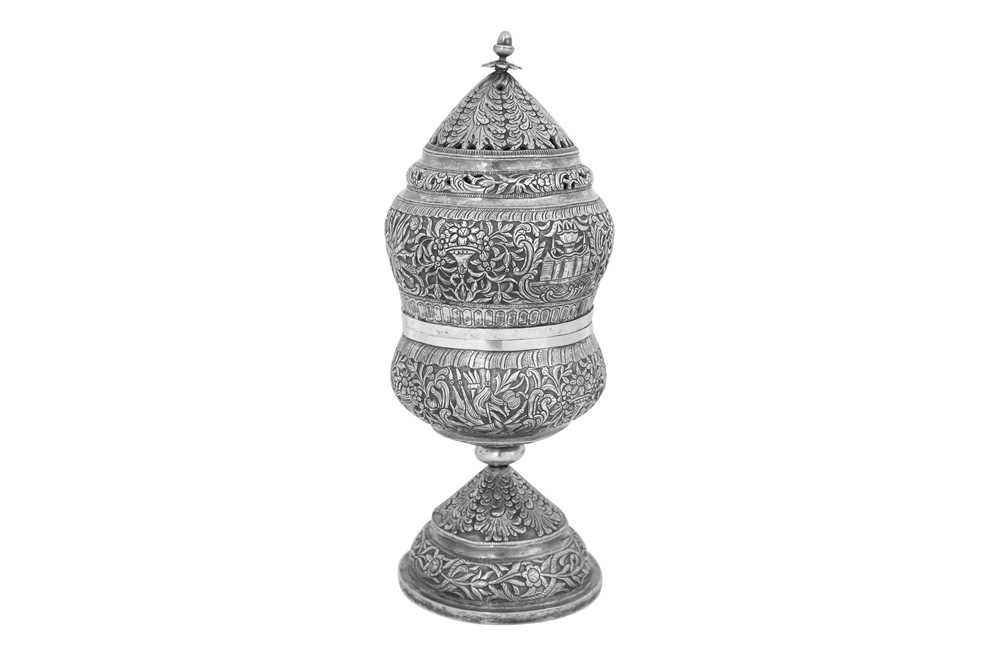 Of bulbous shape, resting on a dome-shaped stepped foot, rising to a gourd-shaped body compressed in the centre and a conical top, the exterior finely worked in repoussé and decorated with a great variety of motifs typical of Ottoman Greek silver productions of this time such as dense foliage, rosette festoons, bountiful cornucopia, military coat of arms, buildings resembling Christian Orthodox churches, lush vegetal trellis and palmettes, on the hinged lid a repoussé three-masted sailing ship, the top of the lid pierced and the finial shaped as an acorn, 33.2cm high, 912GR.

The most peculiar feature of the decorative composition of this incense burner is the three-masted sailing ship on the lid. Sailing ships were introduced in Ottoman marine history by the end of the 15th century, in parallel with the development of Ottoman maritime affairs in the Mediterranean Sea. However, it took some time before the Ottomans got acquainted with these much larger vessels, and it wasn't until the middle of the 17th century that several new types of large ships started sailing the Ottoman waters, like the göke (Kogge, Coge: a çektiri-type of warship with oars and sails), the barça (barge: a two or three-masted sailing warship with a flat bottom), and the kalyon (galleon: a three-masted sailing warship).

Throughout the 18th century, new models of sailing ships with different features were developed, including the karavele (caravelle: sailing warship),the firkateyn (frigate: a single-deck, single-masted sailing warship smaller than a galleon), and the korvet (corvette: a three-masted sailing warship). The ship on our incense burner is most likely a Turkish kalyon or a korvet, characterised by three sail masts and typically associated with wars and Ottoman maritime conquests. For further information on the naval history of Ottoman sailing ships, please read the full article Ottoman Sailing Ships, from Galleys to Galleons (http://www.turkishculture.org/military/naval/ottoman-ships-758.htm).