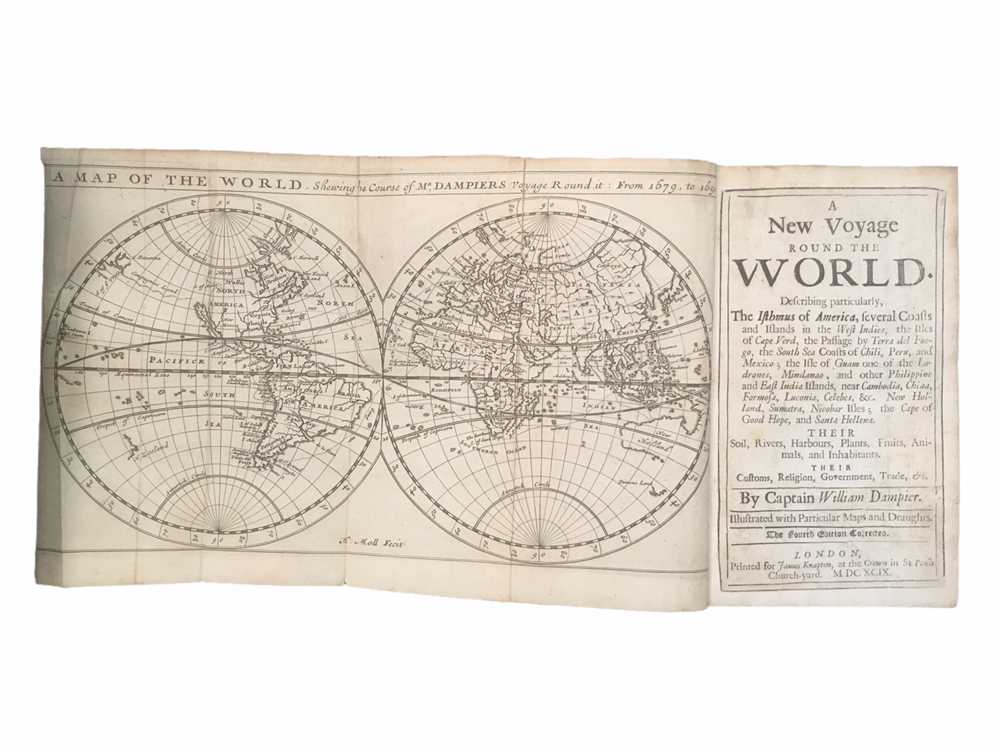 Dampier’s Voyages, 4 vol., the third volume from the collected edition of 1729: A New Voyage round the World. Describing particularly, The Isthmus of America…, the fourth edition corrected, title cut and reinforced, complete with 5 plates (4 folding), map of the East Indies very spotted, some pages shaved affecting text, [ESTC R26665], James Knapton, 1699; Voyages and Descriptions. Vol. II. In Three Parts, viz. 1., first edition, complete with 4 folding plates, H1 with some loss in margin, [ESTC R202687], 1699; A Continuation of a Voyage to New-Holland, &c. In the Year 1699…, 17 plates only (of 18), endpapers loose with some loss, [ESTC N67414], 1709 [with] A Collection of Voyages. Vol. III, lacking pp.209-242, rare title page variation as per Stanford Libraries copy [910.4 .D166B], not including title page for ‘A Voyage to New-Holland, &c. In the Year 1699’, additional titles for ‘A Continuation…’ and Wafer’s ‘A New Voyage and Description of the Isthmus of America’, including folding map frontispieces, text block splitting, 1729; some spotting throughout, each with bookplate of William Monson, various contemporary calf bindings, two ruled in gilt and blind, worn, two with upper boards detached, 8vo (4)

***Poor and obscure, yet determined to sail the world to make his fortune, Dampier survived shipwreck, desertion and imprisonment to become the first person to circumnavigate the globe three times. For his keen observations on Natural History, he is often considered a precursor to Banks and Darwin.