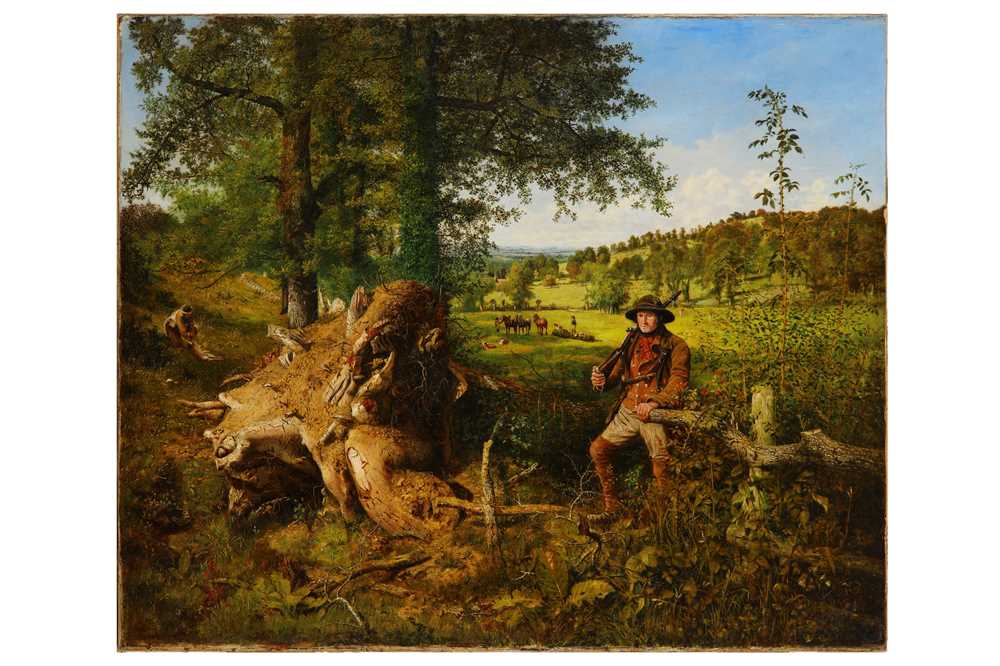 PROVENANCE:
Harold William Smith (1895-1984), grandfather of the present owner (acquired by the late 1930s. Smith was a painter and decorative artist born in Moseley, Birmingham. He exhibited at the Royal Academy and the RBSA, to which he was elected a member in 1938. One of his many decorative projects included a mural commission for Cadbury's Bournville factory.)

Mote was self taught, and worked in his formative years as gardener to Sir Thomas Phillips of Middle Hall near Broadway in Worcestershire, one of the most acquisitive and eccentric bibliomanes in history. On leaving Sir Thomas's employ Mote subsequently painted full time, exhibiting regularly at the Royal Academy between 1857-73.

The painter’s best and most characterful works, as in the present example, suggest some of the obsessive qualities that he almost certainly shared with the eccentric Sir Thomas. Mote's long appreciation for and understanding of nature instilled into him as a gardener is abundantly clear in the extraordinary high definition of the vegetation, which exhibits something of the fastidiousness of the style of Richard Dadd. Lovingly detailed, Mote clearly takes as much pleasure from painting every crevice of the nether regions of the uprooted tree as he does in portraying the forthright honesty of the game keeper. And his brush captures the surrounding vegetation, including dead wood, lichen, fungi, and leaves with a similarly knowing forensic intensity.

More than being just an exquisitely observed bucolic country scene, however, the landscape suggests an underlying political message. In the meadow in the middle ground loggers have felled a numbered tree trunk that they are preparing to drag away, perhaps for use in the royal shipyards. Yet the massive form of the fallen oak in the foreground, similarly marked, seems to have come down of its own volition, the wood showing signs of infestation, canker and disease. In similar contrast, whilst the frank face of the gun toting game keeper surveys the viewer, hidden from his sight by the tree stump, a poacher steals a recently killed hare in broad daylight. And thrusting upwards on the right side, almost as high as the cultivated oak trees on the left, is a single wild thorny briar that flourishes insolently tall, as it stands proud against a clear blue sky. Mote’s incorporarion of visual metaphors into his composition, loaded with contemporary meaning, cleverly hint at the underlying political and social discontent of the day.