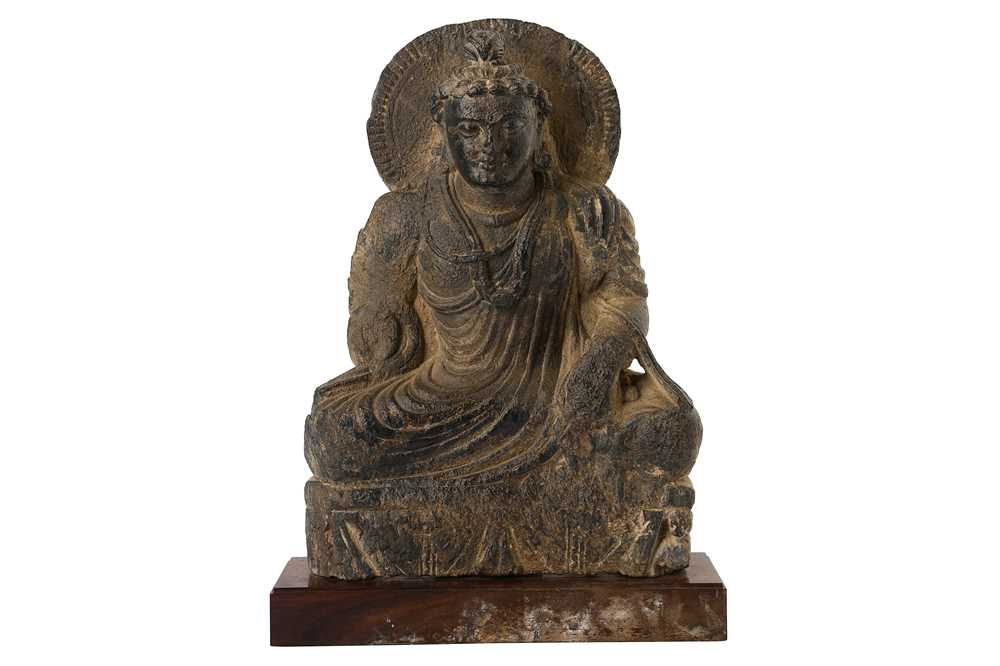 Carved in full on three sides, the haloed Buddha depicted seated on a throne in the lotus position, holding one hand on his lap and the other sadly missing, possibly once showing the abhaya mudra (Fear Not Gesture), clad in a heavy and multi-folded cloak covering his body and right shoulder, the left shoulder showing his naked torso, around his neck several bejewelled necklaces, a reminder of his princely past, his face tranquil and serene, with narrowed eyes and tight lips, in the middle of his forehead a raised urna or Third Eye, his elongated earlobes embellished with heavy earrings, now partially missing, his hairstyle influenced by Greco-Roman fashion with his lush curls tied up in a tall bun above his cranial protuberance (usnisa), the halo behind him carved with lines imitating sun rays, the throne flanked by two lions (one now missing), the statue mounted on a later wooden base, 51cm x 36.7cm including the base.

The style and details of this seated Buddha statue show interesting connections with what will later become the established iconography for the Bodhisattva Maitreya, also known as the Buddha of the Future. The heavy jewellery, lush curly hair and diaphanous cloak covering only one shoulder appear to be consistent features in Bodhisattva's iconography, more so than in Buddha's statues. The typical bottle Maitreya holds, though, is here missing. Nevertheless, so is the left hand; one could speculate it may have been part of the original carving.