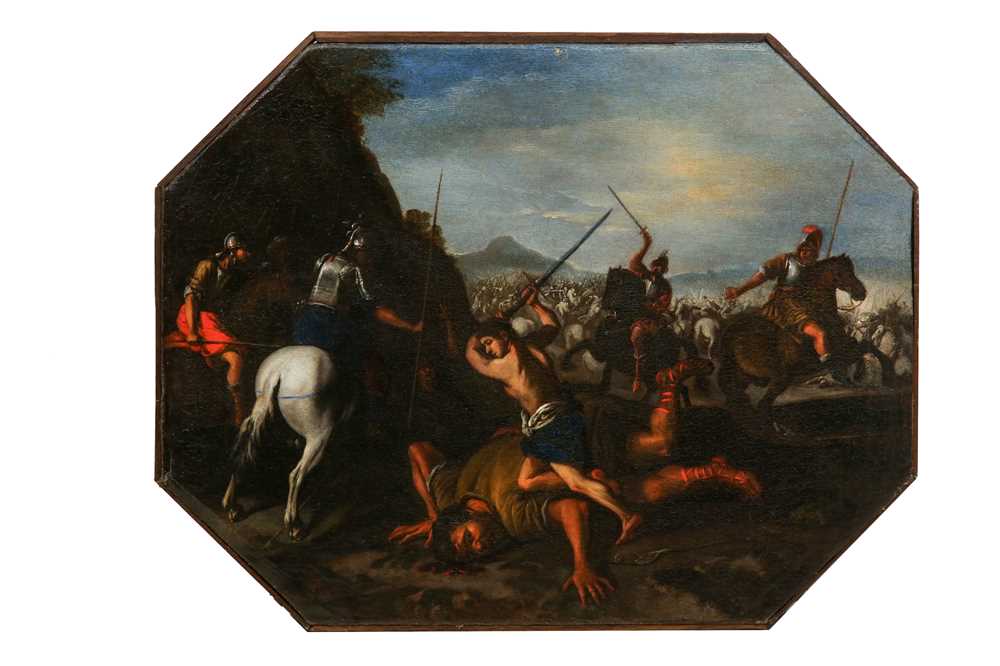 The present recently rediscovered work, can be dated to the mature period of Andrea di Leone’s career as a painter of battles, when his work reflects his increasing stylistic independence from his master Aniello Falcone (Naples 1660 - 1665).

The scene of David fighting Goliath in the foreground emphasises the violent backdrop inspired by the wars of the time. Goliath's size and distortion in the foreground are typical of De Leone's style in his later years, as also shown in a signed painting of the same subject dating to circa 1645 in the collection of the Capodimonte Museum in Naples (inv. 8315), (fig. 1). De Leone’s sophisticated use of lapis lazuli in David’s cloak and in the sky adds drama to the composition.

Divided into two parts, the foreground remains in the shadows leaving the protagonists in the dark while the light shed on the turbulent background reveals a mass of soldiers on the battlefield. The Neapolitan practice of life drawing was key to the depiction of such battle scenes, as illustrated by the several red chalk male nudes in movement.

Andrea di Leone built his fame and a commercial success on his battle paintings, stimulated by important commissions, and strong market demand thereafter. The battle painting genre developed in Naples in Aniello’s Falcone workshop, And it was Andrea de Leone and Salvatore Rosa in particular who went on to explore the theme further. The genre had become a flourishing topic of the day in aristocratic European circles, and in Naples most particularly, due to the Thirty Years’ War, which had seen young Neapolitans sent to the front across Europe.

We are grateful to Miriam di Penta for her help in cataloguing this present lot.