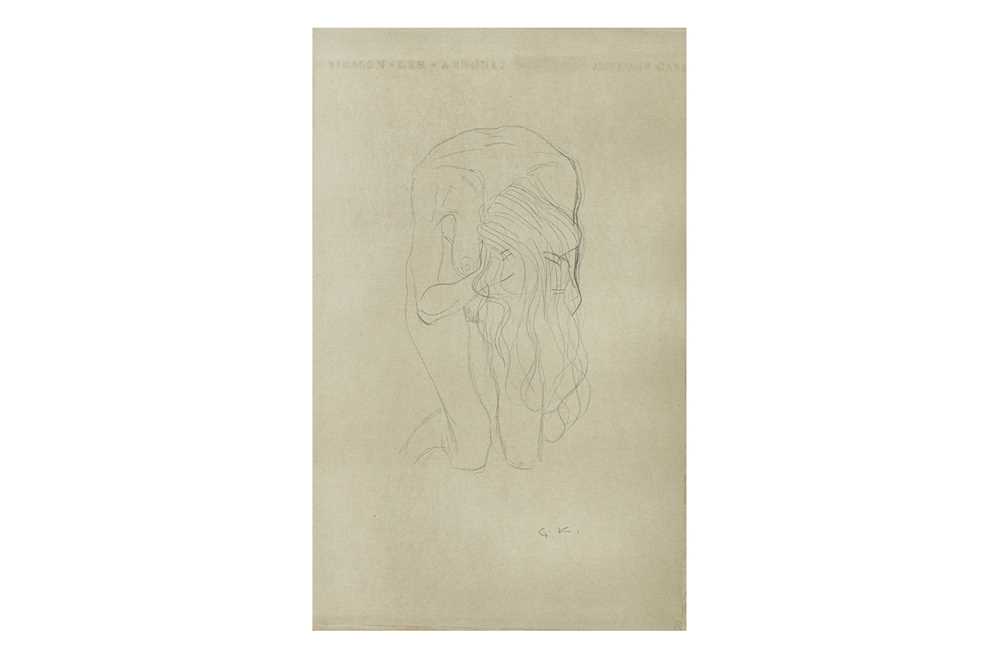 There is a sketch of an arm and breast on the reverse.

PROVENANCE:
Carl Reininghaus (1857-1929), Vienna (Klimt's annotation of the present work with the initial R in the lower right corner confirms that this was one of a number of studies for the Beethoven Frieze owned by Reininghaus. A successful industrialist, Reninghaus was one of the most significant collectors of contemporary art in Austria at the end of the 19th century. A patron of both Egon Schiele and Klimt, he acquired Klimt's finished Beethoven Frieze together with related sketches for the project to save it from destruction following its exhibition at the Vienna Secession in 1902.)
August and Serena Lederer, Vienna
Erich Lederer, Vienna (son of the above)
Sale, Sotheby Parke Bernett, New York, 16th May 1979, lot 61
Purchased at the above sale by the parent's of the present owner

Executed in 1901, the present work is one of the series of sketches from which Klimt worked up his epic Beethoven Frieze shown to great acclaim at the 14th Viennese Secessionist exhibition from April - June 1902. Conceived as a tribute to the composer on the 75th anniversary of his death, the exhibition was overseen by Joseph Hoffman, and featured the work of 22 different artists, including that of Max Klinger whose sculpture of Beethoven was positioned in the centre of the hall. Intended just for the duration of the show, Klimt painted his vast mural - 7 ft in height by 112 ft in length - (2 x 34 metres) directly onto the walls of the first room the public entered. Attracting nearly 60,000 visitors, the exhibition was one of the most successful mounted by the Secession, and it proved to be a turning point in Klimt's fortunes. After the show ended the mural was preserved and is now on permanent display in the basement of the Secession building in Vienna.

Klimt conceived his frieze as a celebration of mankind's search for happiness in a suffering world in which the individual is forced to contend both with the external forces of evil and personal self-doubt. Strobl catalogues the present work as being one of the studies for Nagender Kummer (Gnawing grief) in the frieze. But according to Dr Marian Bisanz-Prakken, the figure originally belonged to the first group of figures in the frieze called Die Leiden der schwachen Menschheit (The suffering of weak humanity) which Klimt developed into a working sketch of a kneeling male, but eventually chose to omit from the finished composition. For the kneeling male see: Gustav Klimt, Painting, Design and Modern Life, Exh. cat., Liverpool 2008, pp. 80-81.

We are grateful to Dr Marian Bisanz-Prakken for her assistance in cataloguing the present lot.